I don’t have to go far to get “A View to Hugh”—all I have to do is literally look over my shoulder. Perhaps I should explain what I mean by first introducing myself. My name is Patrick Cullom and I was hired this past October as a Visual Materials Archivist; I share an office and processing space with Elizabeth Hull. I grew up in North Carolina and had seen images taken by Morton in books, posters, and other places without fully appreciating who he was or what his work had done for the state. Now I have the unique opportunity to be present while the collection is processed.
I have often heard my position in the photographic archives described as “Processing the photographic collections that are NOT Hugh Morton.” That’s sort of accurate, I suppose. The first collection I have been working with consists of photographic materials created by Edward J. McCauley, a newspaper photographer for the Burlington Times-News (NC). McCauley took photographs for the Times-News from 1949-1974 as well as running his own personal photograph studio. The collection consists of approximately 100,000 images and presents an encompassing view of Burlington from the 1950s-1970s.
Even though the scopes of our collections are quite different, Elizabeth and I often discuss similar topics and issues that arise when working with each of our collections. Morton and McCauley were contemporaries, so it makes sense that they might have been at some of the same events with statewide importance, including political and sporting events. At this point in my work, I cannot not say definitively that McCauley and Morton knew each other well, but it is clear from some of the images I have processed so far that they did cross paths at least a few times. I know that McCauley attended some of Morton’s famous camera clinics.
I have included two images in the McCauley collection that show a connection between the two collections. The first is a detail cropped from a group portrait of photographers attending the Miss North Carolina Pageant sometime in the 1950s. Morton is in the passenger seat of the car and McCauley is behind him next to the pageant contestants (third from the left). 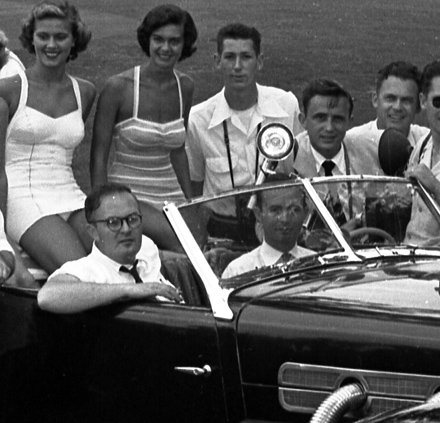 To put the detail into its larger context, I have also included a full version: 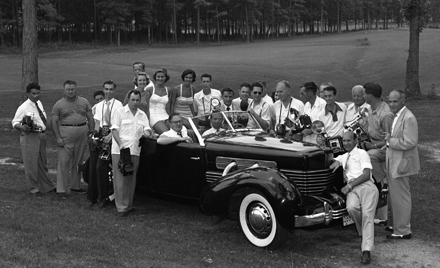 The other image I have included doesn’t contain McCauley or Morton, but McCauley made the photograph at the Grandfather Mountain Highland Games sometime in the late 1950s. He took this image at of one of the events at the games and it is part of a series that includes members of the McCauley family at Grandfather Mountain. 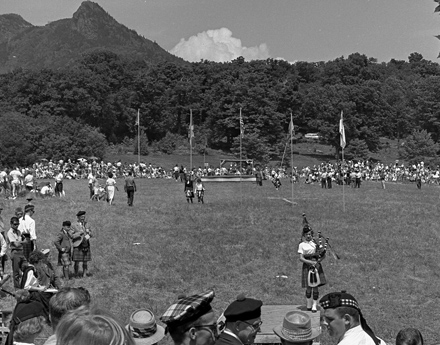 Who knows where else these two photographers crossed paths (or cameras)? I will be sure to drop a note when such images surface.

4 thoughts on “A Contemporary of Morton”