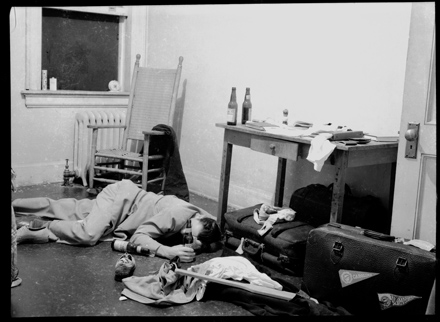 A recent news feature in the UNC-Chapel Hill student paper, the Daily Tar Heel, about alcohol use among students reminded me of these photos from Hugh Morton’s days on campus. It seems that college kids will be college kids, whether it’s the early 1940s or the 2000s. I have to say, though, that these first two images look somewhat staged to me. Morton worked as a photographer for the DTH, the Yackety Yack (yearbook), and other campus publications while he was a student—maybe he set these shots up to go with some piece of hard-hitting investigative journalism? 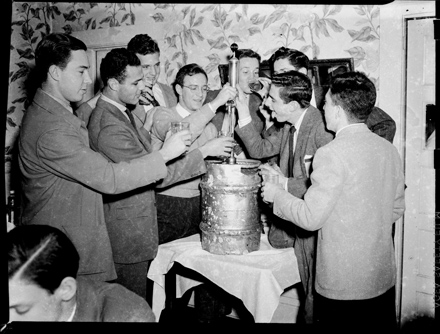 Or perhaps not so hard-hitting after all. Stephen and his freakish memory recognized the image below from the student publication Tar an’ Feathers, a cheeky, sometimes raunchy humor magazine put out from 1940-1942, for which Morton was photographer (and may have contributed other material). A cropped version of the image appears at the bottom of page 15 in the April 1942 issue, with a caption that reads:

“A shot by Hugh Morton showing what happens in the split second when a beer can is opened. Joe Miller stooges, while Elmo Hollingshead soberly contemplates.”

(The Tar an’ Feathers is so rich that I’ll have to save it for a later blog post; in the meantime, if you’re interested in UNC student publications you can check out the exhibit Tar Heel Ink, which the North Carolina Collection Gallery produced in 2005.) 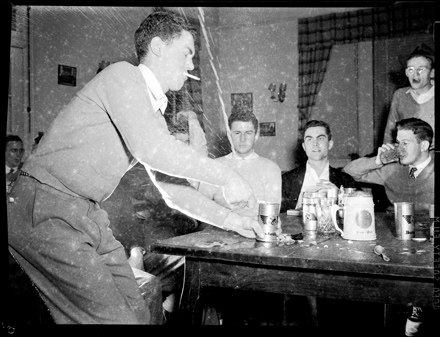 One thing has changed on campus very recently, and that’s the expansion of the No Smoking Policy which extends non-smoking areas to 100 feet from University facilities (forcing smokers to gather under the flagpole at the center of the quad). Gone are the days when students (or anyone, for that matter) can puff at will as the fellow pictured below was able to do when Morton snapped his photo. 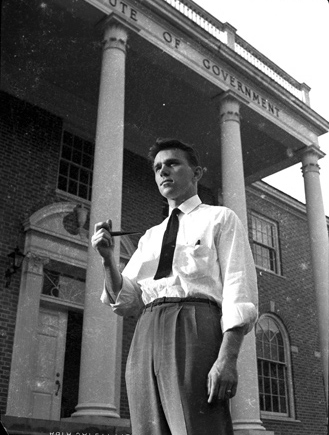 2 thoughts on “How times have (and haven't) changed at UNC”