A bell went off in my head when I read Eileen McGrath’s February 11 post on our sister blog, North Carolina Miscellany, about the official North Carolina State Dog, the Plott Hound. Evidently 2008 is the first year the breed has been admitted to compete in the Westminster Kennel Club Dog Show. A Newsday article provides some hound background: “Developed in the mountains of North Carolina by two German brothers who lent the breed their name, this big-game hunter was bred for baying boar and treeing bear. A true hunting hound, the Plott has a striking brindle coat, and is known for being intelligent, tenacious—and vocal.”
Strangely, Hugh Morton was known for those very same qualities (aside from the brindle coat). Seeing as how the Plott is the official NC hound, the only breed known to have originated in the state, and hails from the mountains, you might guess that Morton would have photographed it . . . And, you would be right. 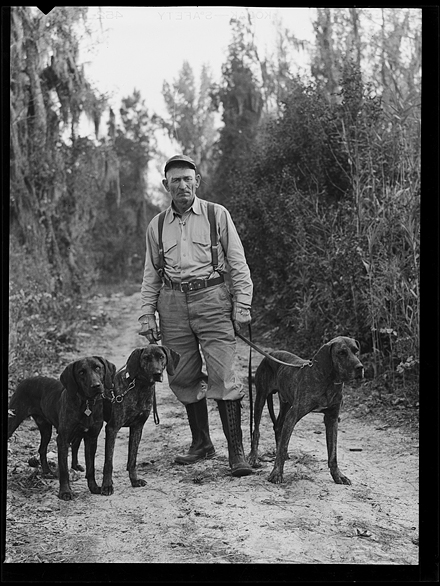 This gorgeous image is from a set of negatives labeled “Plott Hounds— Lake Waccamaw Bear Hunt.” My guess is they date from the late 1940s or early 1950s; the man is unidentified. Please let us know if anyone can provide additional context.
The hound group competed on Tuesday at Westminster, and I regret to report that the top prize went to an upstart beagle named Uno, who then went on to become the first beagle to win best in show. (The Plott didn’t even place). I guess recognition for this magnificent NC hound will come in stages.

24 thoughts on “"Of fine nose and beautiful voice"”