Early in the process of surveying the Morton collection, I came upon a few mounted images from a “picture story” he had submitted to Life Magazine in 1951—not sure if it was ever published. The title of the photo essay was “Venus Fly Trap Moves Nearer Extinction,” and I was surprised to learn from reading one of the captions that the “moist pine barrens within 40 mile radius of Wilmington, NC are the only spots in the world where [the flytrap] is found growing wild.” News to me!
That same evening (I swear it’s true), I just happened to begin Josephine Humphreys’ novel Nowhere Else on Earth, and what did I read on page 2 but the following beautiful description of the swamps near Wilmington:

Some were pocosins, shallow egg-shaped basins landlocked and still, scattered northwesterly as if a clutch of stars had been flung aslant in one careless toss from heaven, leaving bays that sometimes filled with rain and sometimes dried in the sun, growing gums and poplars and one tiny bright green plant found nowhere else on earth, the toothed and alluring Venus flytrap. 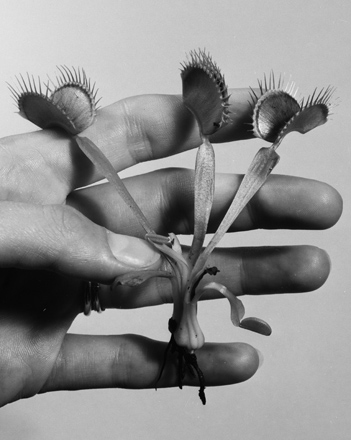 I scanned these two negatives used in the picture story and cropped them almost exactly as Morton did in his enlargements. The image below shows Mrs. Cecil Appleberry (left) and the Cape Fear Garden Club Conservation Committee, at whose insistence, according to Morton’s caption, “a 1951 North Carolina Legislature law restricting commercial shipment of the Venus Fly Trap was enacted.” While presumably a step in the right direction in terms of conservation, Morton also noted that “the real extinction threat comes from drainage.” 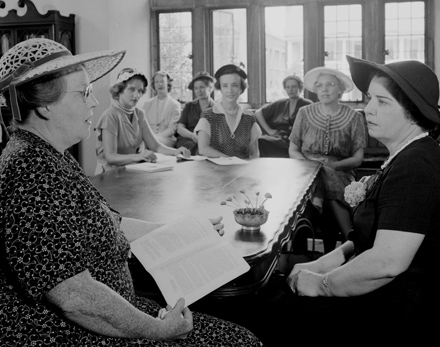 These photos highlight not only the conservation history of a rare species, but the fact that Morton himself was interested in native plant protection at this early stage in his career, before he is typically associated with “environmental” causes.
While it has not become extinct, the Venus flytrap still faces threats from a variety of sources. “Vulnerable Venus Flytraps,” an article from the Winter 2006 issue of Nature Conservancy Magazine, describes clever new methods being employed to deter poachers. “Carnivorous Plants in the Southeast Coastal Plain,” a slide show on the Nature Conservancy website, also provides some fascinating background on the flytrap.

10 thoughts on “Nowhere else on earth”