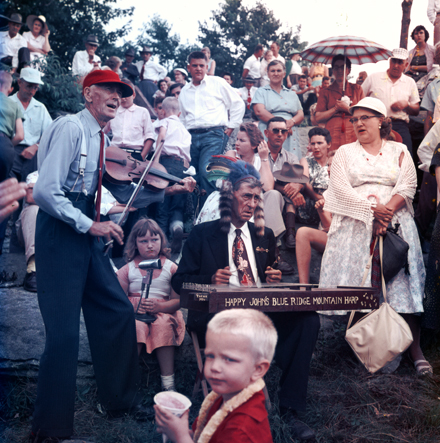 I recently had this fantastic image scanned as a possible submission for the cover of College & Research Libraries News, as (yet another) way to publicize the Morton collection—but I thought it was too good not to share on the blog as well. Morton took this photo on Grandfather at Singing on the Mountain (“the oldest ongoing old time gospel convention left in the Southern Appalachians”) in about 1957. I love the colors, the hats, the bustle of activity, and the variety of people’s postures and expressions— especially the fact that neither Happy John nor his assistant (with the microphone) look particularly happy.
In “History of the Great Singing on the Mountain,” a circa 1949 pamphlet held by the North Carolina Collection and written by Joe Lee Hartley, longtime Chairman of the Sing, I see a mention on page 12 of “that old esteemed and lovable friend John Cable from Butler, Tennessee, who has always attended and helped out in the work of the Lord and we all hope some day to meet him in Glory.” Is John Cable Happy John, perhaps?
This image really makes you curious about the stories of the people pictured in it. Can anyone provide those stories? Is there someone here you recognize?
UPDATE 5/13/2008: I’ve been able to gather a bit more info about John Wesley “Happy John” Coffey, thanks to his granddaughter Thelma Coffey of Blowing Rock, NC, and to Jerry Burns, editor of the local paper The Blowing Rocket. Jerry sent me a copy of an article by Ruby P. Ellis called “Remembering Happy John” that originally appeared in “a state newspaper in the 1950s” (re-run in the Rocket in October 2006). From the editor’s note for the 2006 reprint:

Happy John Coffey remains a legend in the mountains and is considered one of the pioneer musicians whose tunes reflected the deepest roots of the mountaineer—his tragedies, his sorrows, and his happy-go-lucky lifestyle. Happy John, as best we can find out, was born in the early 1870s and lived until around 1967. He was the most important attraction in the settlement at the time and as Blowing Roc becase chartered as a villave in 1889 and until he died, Happy John continued to draw the attention of visitors who delighted in listening to his music played on a contraption he built himself that he called his “mountain harp.”

From Ruby Ellis’ article we learn that a since childhood burn prevented Happy John from being able to pick a banjo or bow a fiddle, he invented his own instruments and “picks” (kind of a combination of an autoharp and a hammer dulcimer). He was a fixture at “Singing on the Mountain,” usually performing with his brother Roby Coffey on fiddle (pictured in the red cap above), and could often be found at the Blue Moon filling station near Blowing Rock “an hour or two each day ‘pickin’ and singin’ for the folk.'”
A wealth of genealogical information about Happy John and many other Coffeys/Coffees can be found on the blog Coffey/Coffee Call. Thanks to all (Jerry, Thelma, Robert Hartley) for contributing information, and please share whatever else you may know!