In honor of the beginning of the NCAA Men’s Basketball Tournament (in which UNC is the #1 overall seed, by the way), and since I’m just starting to sort through Morton’s basketball negatives, I thought I’d quickly share a few highlights from UNC basketball glories past.
The first image is from the 1946 tournament, which marked UNC’s first appearance in the title game, played at Madison Square Garden against Oklahoma A&M. Sadly, UNC lost to Oklahoma 43-40. 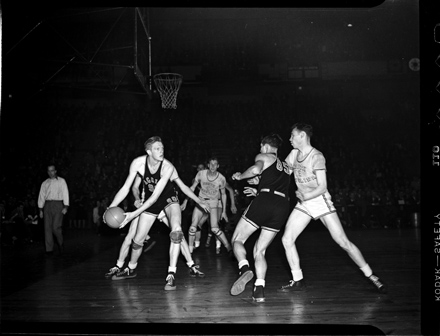 UNC’s first title win came in 1957, and while I’m fairly certain Hugh Morton would have photographed the tournament, I haven’t yet found the negatives to prove it. There are, however, some shots of the 1957 championship team in the library’s UNC Photo Lab Collection.
And then, of course, there’s the famous 1982 tournament, when a UNC team containing such legendary members as James Worthy (below, right), and a young Michael Jordan (center) defeated the Georgetown Hoyas, led by Patrick Ewing. (I scanned this image from a print, since I haven’t yet found the negative). Morton photographed this tournament heavily, collaborating with David Daly on the 1991 book, One to Remember: The 1982 North Carolina Tar Heels NCAA Championship Team, Then and Now. 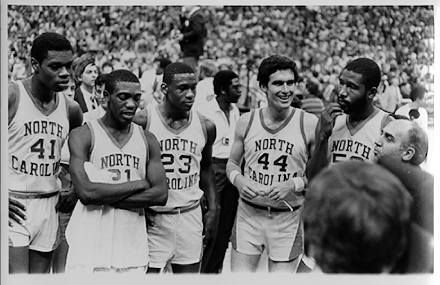 Also legendary was the team’s coach from 1961 to 1997, Dean Smith, seen below on the sidelines during the 1982 tournament. Smith and Morton were close friends, and Morton provided many of the photos for Smith’s 2002 memoir, A Coach’s Life. The Morton collection contains hundreds of images of Smith, not only at games and press conferences but also playing golf, hanging out with bears at Grandfather, etc. 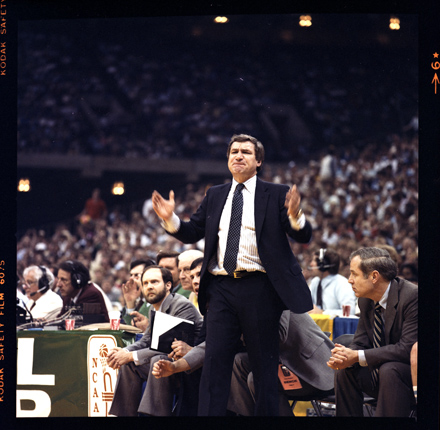 Hopefully, in a few short weeks, we’ll have some new, triumphant memories to add to this list . . .

2 thoughts on “Start the Madness!”