As I’ve been sorting through Hugh Morton’s negatives over the past few months, it’s been fun to keep an eye out for different technical aspects of his work—how he would occasionally experiment with various film types and lenses, lighting, focus, depth of field, etc. One trend I have noticed is his fondness for time exposures, or the use of longer exposure times (leaving the shutter open for multiple seconds, minutes, or maybe even hours) to convey motion in the images he created.
You’ll often see this technique used in photos of waterfalls, where a longer exposure gives the water a silky, almost foggy look. This isn’t the greatest example, but take it from me—Morton experimented heavily with waterfall photography. (Anyone know where this was taken?) 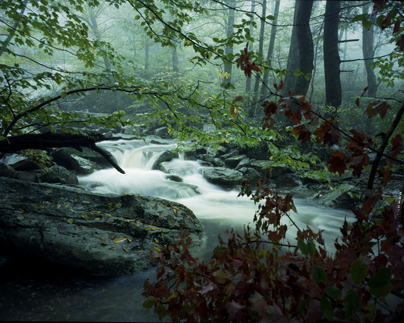 One of Morton’s best known time exposures is on page 41 of the 2003 book Hugh Morton’s North Carolina—the one where Morton got a security guard to drive his car up and down the road to Grandfather Mountain while he held the shutter open. (I would have included that image in this post, but I’m thus far I haven’t found the original!). NOTE: See update at end of post.
I love the image below, which I presume was taken at one of the ski slopes in the Boone area. (Anyone know which one? While I did grow up in Boone, I was not physically coordinated enough for skiing. Also, my mother worked for a while in the local emergency room, so I knew the possible consequences). The light trails create a wonderful and somewhat creepy effect in combination with the “ghostly” skiers at the bottom. 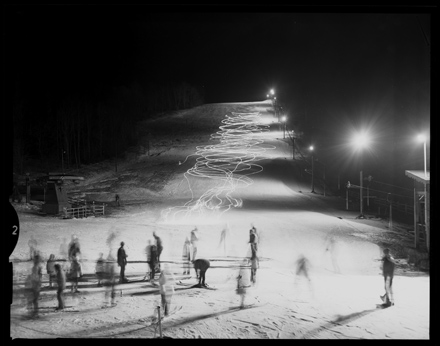 Here’s another striking example from Morton’s younger days—this one’s labeled “Rides, Carolina Beach,” and was taken sometime in the 1940s. 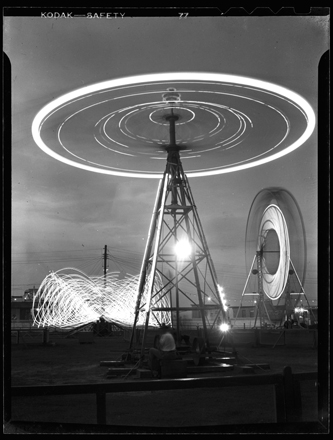 Finally, here’s an example of a time exposure gone wrong (or right, depending on your perspective—I think it looks cool). Believe it or not, this is a nighttime image of UNC’s Old Well, taken sometime around 1940. Perhaps he hadn’t yet invested in a tripod? 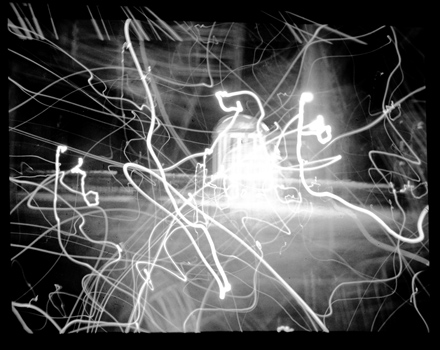 UPDATE 5/20/2008: Stephen’s been messing around with the new scanner, and I just happened to notice that he had done a test scan of one of Morton’s time exposure slides of the road up to Grandfather Mountain. Here it is: 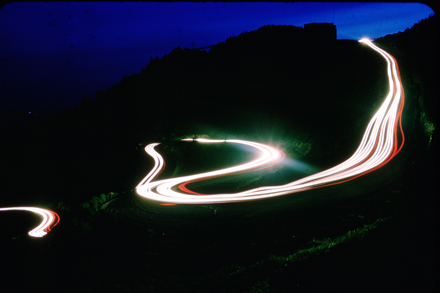