As I near the end of my initial sort through the Morton negatives, I am forced to confront that evil category: “miscellaneous.” Most archivists hate that word, and try to avoid using it in their descriptions, because it is so very useless in terms of letting people know what a collection or grouping actually contains. But the fact is, some images just don’t fit into any of the subject categories I’ve established. Photos of car accidents . . . unidentified living rooms . . . a piece of needlework . . . half a sandwich and a cup of soup. How to classify these? I’ll have to figure that out at some point, but for now they’re resting under the nasty M-word.
Also under the M-word (for now) are images I’m unable to identify well enough to know whether they might fit into one of my existing categories. The intriguing image below is one such case. It dates probably from the early 1950s, is in an envelope labelled “Atom Artillery Bn.,” and shows men in uniform boarding a large ship. I’m guessing it has something to do with atomic artillery (first tested in 1953), but what does “Bn.” stand for? (Battalion, perhaps)? Where was it taken? Does anyone know the 1,000 words behind this one? 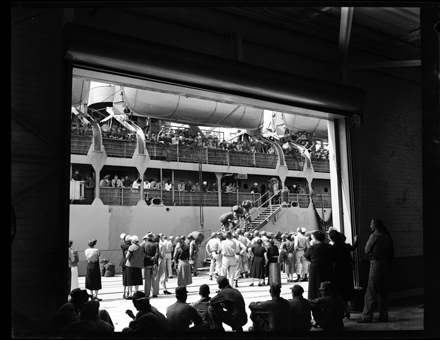 5 thoughts on “The dreaded "miscellaneous"”