Back in December and January, I wrote four blog posts about the issues surrounding the scanning of the Hugh Morton collection, in particular the estimated 200,000 slides. The silence afterward may lead you to believe that nothing more has happened on that front. Actually it has been quite the opposite!

In the last installation of the series, I mentioned we would investigate the purchase of a Kodak HR 500 or a HR Universal film scanner. In late February and early March, we took delivery on a Universal along with three accessories pulled together from various parts of the planet. The scanner comes equipped with “film gates,” devices used for scanning individual negatives or slides. 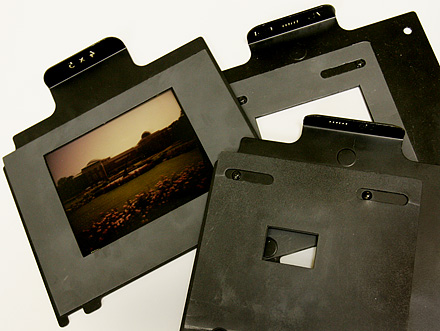 This scanner is not, however, designed for one-off scanning; it is a production workhorse. The used scanner we purchased—Kodak discontinued the product line in 2005—is in great condition even after having made more than 1,000,000 scans in its lifetime. For production mode, the scanner uses “AutoStrip Gates” for cut strips of 120 or 35mm roll film (usually into lengths of four to six frames) and an “AutoSlide” accessory for 35mm slides, all manufactured by Halse Imaging Systems in England. We purchased a brand new 120 strip gate from Halse, while the 35mm strip gate (from the USA) and the slide unit (from Holland) are used.

The AutoSlide accepts Kodak slide carousels that hold 80, 35mm slides.
Since the slides are the component of the collection on which I have focused, I leapt eagerly into the . . . . 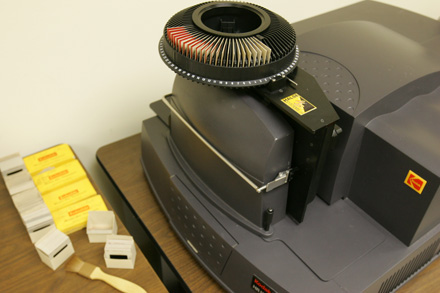 Oh boy! To make a long saga short, the AutoSlide accessory didn’t work from the very first day. After three visits from the Kodak repair man in consultation with Kodak repair HQ and an exchange of email to England, we decided to ship the unit to Rochester where they could compare its operation with working units on hand. Last Friday, after days and days and days of struggling, angst (I am not exaggerating), and detriment to my other responsibilities, the AutoSlide lived up to its billing. I loaded the carousel, hit the “go” button, and it worked flawlessly, generating nearly 600 scans during a day with a few interruptions and a couple meetings. A fully loaded carousel can be scanned in half an hour. For the techno crowd, those scans are 18MB TIFFs, 24-bit, with a pixel array of approximately 2000 x 3000 pixels. That 3000 pixels across the long dimension meets the “alternative minimum” in the National Archives and Records Administration guidelines described in part four of the 200,000 slides series.

So now I’ve got a lot of scans on my hands, which means more posts in the offing to discuss what we’ll be doing with them. Elizabeth will be so happy that I can get back to my share of writing!