Yesterday’s NC Miscellany post alerted me to the upcoming 75th anniversary (1934-2009) of the Great Smoky Mountains National Park. They’ve set up an interactive website to help celebrate. I was going to upload a Hugh Morton photo to their nifty “Family Album“—until I read their Photo Release agreement, that is. (Somehow I don’t think the library would appreciate my agreeing to those terms!).
So, I’m offering an independent, A View to Hugh tribute to the GSMNP. A cropped version of the following photo appeared on the cover of the October 1, 1968 issue of The State magazine, referencing an article by Jane Corey called “Hugh Morton’s Favorite Ten.” Included below is the text that accompanied the photo in The State. 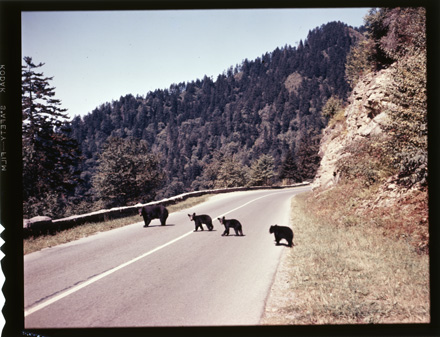 Among Hugh Morton’s 10 favorite photos—of the thousands he has made—is this shot of a mother bear and three cubs walking across a road in the Great Smokies. It is a once-in-a-lifetime picture, says Hugh, because any time bears show up on a highway, a crowd quickly forms. “I know I will never again have the chance at a shot like this without people showing.”

10 thoughts on “Smokies to celebrate 75th”