Thus far, our student assistant David’s scanning efforts have been focused on what I call the “loose strips”—the unlabeled, unidentified masses of negatives that need to be inspected before we can decide what to do with them. (The inspecting, of course, becomes much easier when you can look at a positive on a computer screen versus a negative on a light box).
We decided recently, however, that since David is so darn good at scanning, we should probably have him work on some of the “good stuff” as well. (This term refers to Morton’s images of well-known people and events—it’s certainly not to say that the loose strips aren’t loaded with “good stuff”). So, I got David started on the images that were either considered for or used in Hugh Morton and Ed Rankin’s 1988 book, Making a Difference in North Carolina. As the book’s introduction reads:

The people, groups and events [depicted in the book] were chosen on the basis of the impact they have had, or are having, on life in North Carolina. Most of the photos have never been published before. And all have captions and text brimming with first-hand knowledge and experiences of the authors.

What could be better? Certainly a far cry from the jumble of “loose strips.” And the images themselves are beautiful. Take for example this portrait of Governor J. Melville Broughton, a cropped version of which appears on page 47 of the book (click the image to see the description): 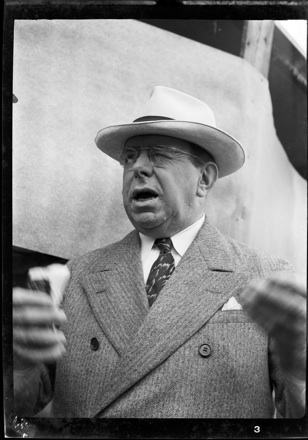 I also love this image of the “Iron Major” Governor, R. Gregg Cherry, with a group of (Miss North Carolina?) pageant contestants. This one wasn’t used in the book, so I don’t know the details. But I do wish they still made swimsuits like these! 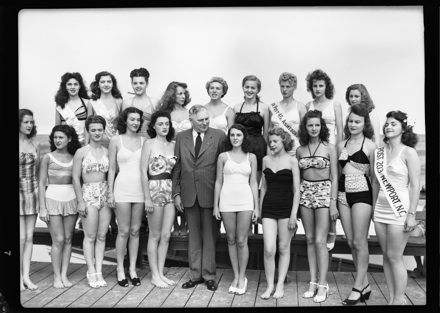 And then there’s that perennial Morton favorite, Luther Hodges (on crutches, below—this image wasn’t used in the book, either). That’s Grandfather Mountain in the background, and they appear to be on a golf course, so perhaps this image is somehow related to the Grandfather Golf and Country Club? Anyone know what’s wrong with Luther’s foot, or who these other men are? (Based on the IDs you lovely readers provided for this photo, I think that’s John Williams to the left of Hodges). 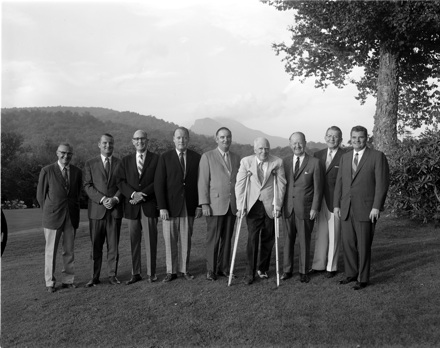 7 thoughts on “Making a Difference in NC”