This quotation comes from page 15 of the book Making a Difference in North Carolina, co-written by Hugh Morton and Edward L. Rankin. Though most of the pages are filled with intimate portraits of politicians and other influential individuals who operated on the state as well as national level, one chapter is devoted to Hurricane Hazel (arguably just as influential a figure as the others in the book).
Hazel visited the Coastal Carolinas as a Category 4 hurricane in the middle of October of 1954 after striking Haiti with deadly results. As we in the Carolinas are just coming out of the zone of influence of another H-named storm and, as a nation, are about to be assaulted by an actual hurricane, it seems appropriate to post some pictures that Hugh Morton took during the 1954 hurricane season. All of these pictures are from Carolina Beach, NC.
Let’s begin with an award-winning photo: 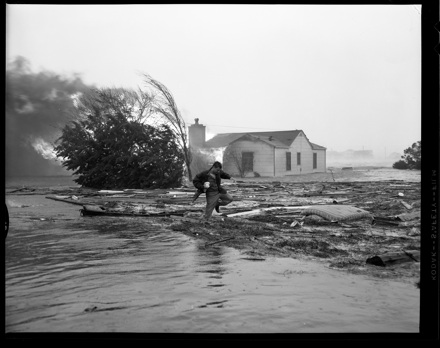 This picture of Julian Scheer, a Charlotte reporter (and later NASA Public affairs Chief during the Moon race), won Morton the “first prize for spot news in the NC Press Photographers Association,” in 1954  (Morton, Rankin 15). The houses in the background are disappearing into the ocean, and the house in the mid-ground is on fire. Aside from these details, I don’t think it needs much of a caption, as it speaks, dramatically and clearly, for itself.

Some more pictures that were really interesting and are in need of identification are ones that appear to be the wrecked remnants of a boardwalk. 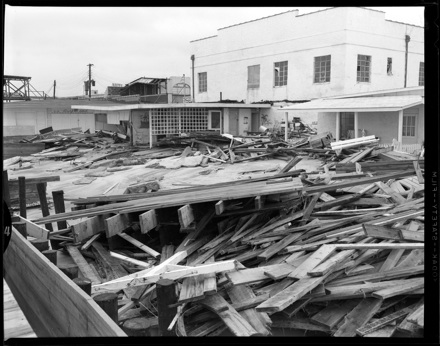 I was able to identify one of the stores, the Ocean Plaza Bathhouse (that appears in the background of the picture, but gets more prominence in other ones in the series), a somewhat well-known institution of the time at Carolina Beach. Does this place still exist? Or did a hurricane and/or a decline in interest towards bath houses contribute to its closing? And how about the rest of the Carolina Beach boardwalk? 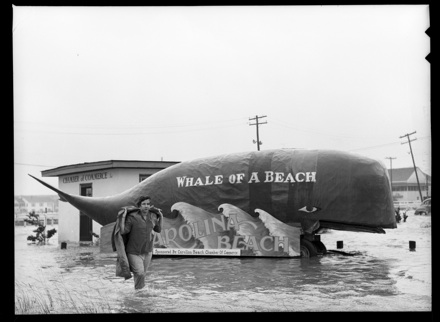 This whale, probably a familiar symbol to those who visited and lived in Carolina Beach, seems to be faring better than some of the other structures. The woman standing to the left seems to be weathering the storm in her own right, but I wonder what she was doing out in the storm? Perhaps she was a local politician, a member of the chamber of commerce, or a friend of Hugh Morton.  I suppose everyone has their reasons for facing a storm; I suppose it still happens today.
If you are one of those individuals, until the hurricane season is over, be safe!
–David