Two of Hugh Morton’s most famous portraits popped up in NC newspapers today. The first is in a News & Observer column by Jim Jenkins, entitled “Walk the line to Grandfather’s top,” about Johnny Cash’s visit to Grandfather in June of 1974 to perform at “Singing on the Mountain.” Jim (with the help of Hugh’s grandson Jack Morton) recounts the events surrounding Morton’s portrait of the Man in Black holding aloft a tattered American flag. (Hugh also tells the story of Cash’s visit on pages 126-129 of Making a Difference in North Carolina). The online version of Jenkins’ column doesn’t include the photo, so here it is (uncropped): 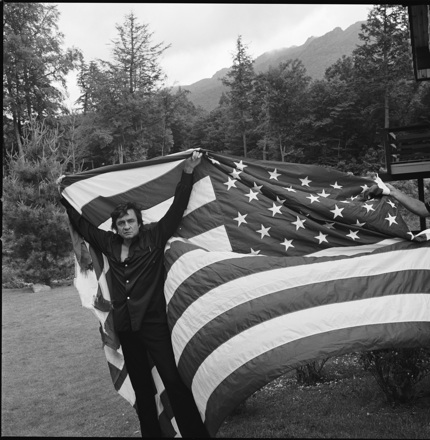 The second is a reference in Wilmington’s Star News to Andy Griffith’s 1953 monologue, “What is was, was football,” the popular comedy routine that is generally credited with launching Griffith’s mainstream career. Morton’s photo of Griffith performing the monologue at halftime at UNC’s Kenan Stadium (below) has been widely published, including on page 130 of Hugh Morton’s North Carolina.
(Note: the Star News website doesn’t seem to be loading at the time of this posting). 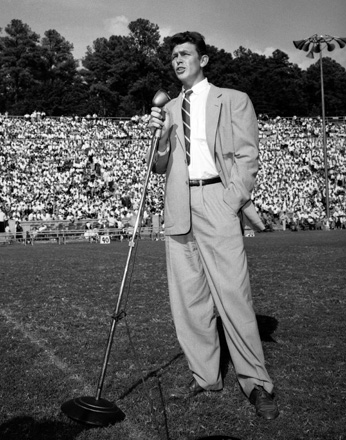