Tomorrow afternoon, Kenan Memorial Stadium on campus will be in the hub of excitement that accompanies UNC football, magnified by the mystique of its opponent, Notre Dame University.  Earlier this week I wrote a blog post for our sister blog, North Carolina Miscellany, featuring photographs in the Photographic Archives made by Bob Brooks in 1949 when UNC first played Notre Dame.  That game took place in New York City’s Yankee Stadium.  And if you didn’t already know or deduce . . . Hugh Morton was there.
I cannot bring myself to include in this entry Morton’s most memorable photograph from that contest.  It’s just too heartbreaking to post amidst the anticipation and excitement of tomorrow’s game.  I promise to publish it on Monday.  Instead, here’s a festive pre-game photograph made of UNC’s mascot Rameses and fans in the lobby of a New York hotel: 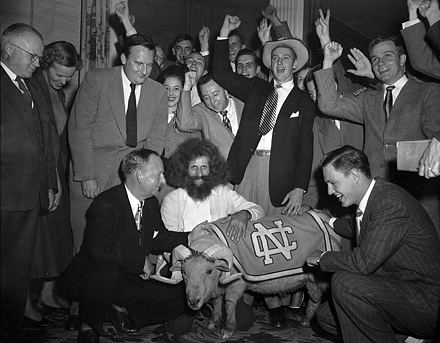 As usual, we’d love to hear from you with identifications if you can.
I spent a good portion of today tracking down negatives from the game (I’ve found some) and trying to confirm that a group of them are from Yankee Stadium.  The day escaped from me in the process, so I’ll post the game photographs on Monday.