Tonight the University of North Carolina Tar Heel men play a game of basketball against UC-Santa Barbara.
My image scanning and processing this month has consisted of mostly basketball photographs,  and  according to a rough estimation they outnumber the usual celluloid suspects — bears, battleships, and pageant queens — by a significant margin. Therefore I have many pictures to choose from, and I feel slightly overwhelmed by all the options, all of which are excellent.
Thanks to a long tradition of basketball movies, I have been given the impression that basketball is about more than slam dunks and court-side gesticulations. Hugh Morton’s photos do not dispel this perception: in the collection there are a host of photographs from locker rooms, press conferences, dinner parties, and airplanes. 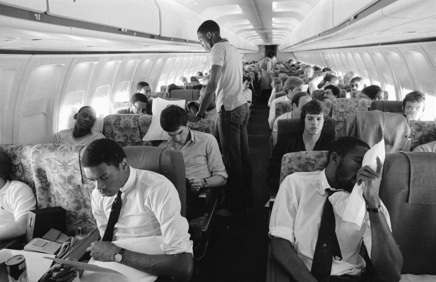 Here is an optimistic photograph, to begin with: a very backstage shot of a very sleepy men’s basketball team returning home on an airplane after their 1982 NCAA championship victory in New Orleans. (Note the young Michael Jordan two rows back on the left, and that looks like James Worthy in the front right, cuddling with his pillow).
Here is another off-court shot, of a very despondent, soda-drinking player in the locker room. The man, presumably a coach, assistant coach, or general father figure, is trying to encourage him in vain. 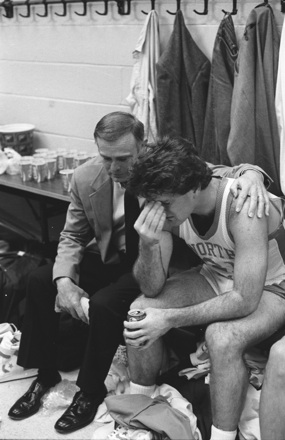 Moving on in the basketball summary, here is a highlight from the collection of on-court photographs. After seeing this, I wonder if maybe basketball really is just about slam dunks. 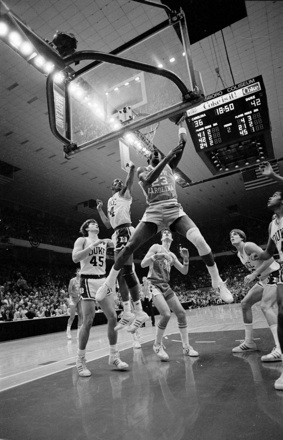 Carolina, in a game against Duke, is trailing slightly (36-42 according to the scoreboard), but I wonder, did this momentous dunk-in-progress by Michael Jordan change things? Was this one of the seminal Carolina-Duke match-ups, or merely another entry in the tally of this legendary rivalry?
My idea on this photo is that, because it was taken in the Greensboro Coliseum, it might be from the ACC tournament on March 10, 1984. If so, then Duke ended up winning, 75 to 77. But I can never be sure, as the photos I process often come to me in the form of loose, undated and unlabeled film negatives, and I have no context for the picture aside from embedded details (nametags and calendars are always welcome!). Can anyone help me identify the particular game?
To close, I have a photo from Hugh’s grandson Jack Morton, who has apparently inherited his Tar Heel photographer’s pass, and is documenting the exploits of current UNC basketballers. More of Jack’s photos from the Nov. 15 Carolina-Penn season opener can be viewed here. It is pretty neat to see the family continuity, isn’t it? 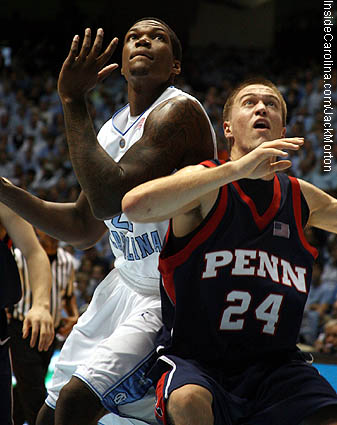