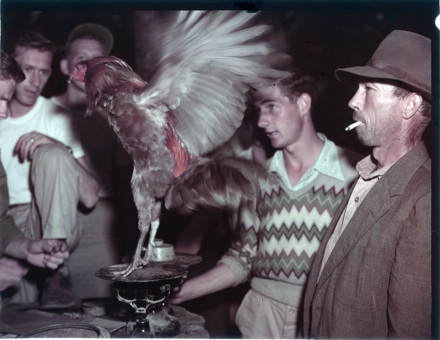 “It is not a bad sport, legal or illegal. At a time like this when the ‘inferiority complex’ is stalking around loose seeking whom it may devour, to see a bird, stuck and stabbed until almost bloodless, rise in his might and make one more supreme effort that finishes his enemy is a useful life’s lesson.”

This stunning quote comes from Bishop Joseph B. Cheshire’s 1930 memoir titled Nonnulla: Memories, Stories, Traditions, More or Less Authentic (links to a fully-digitized version). Since I paid brief homage to turkeys in the last post, I thought I would shift over to chickens for this one, specifically gamecocks. A small cache of cockfighting images in the Morton collection piqued my interest, so I did a bit of research into the history of this illicit “sport” in North Carolina.
A pair of articles from The State magazine from 1953 (the July 11 and September 5 issues) shed some light, leading me to the Cheshire book quoted above and to another 1949 memoir by Paul B. Barringer entitled Natural Bent, both of which include fascinating accounts of and opinions about cockfighting. (Although Morton’s cockfighting photos were taken around 1953 or perhaps a few years earlier, they were not used in either of the State articles). 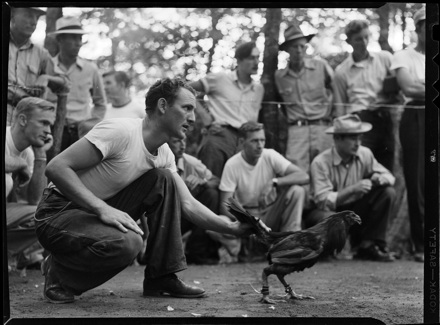 The sport is as old as the state itself.  From “Cockfighting: an Early Entertainment in North Carolina,” a 1965 North Carolina Historical Review article by B. W. C. Roberts, I learned that the first published mention of NC cockfighting dates from 1737, and that Sir Walter Raleigh himself “enjoyed a favorable reputation as a cocker.” I also discovered that “the owners of cocks considered them treasures and bred [them]…as if they were thoroughbred horses.” 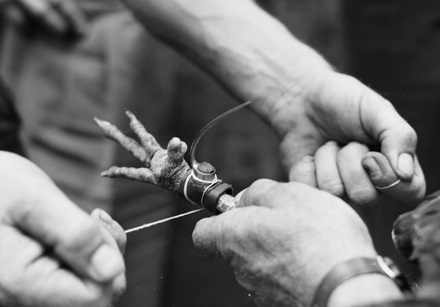 Roberts provides us with the unpleasant detail that “steel-pointed, razor-sharp gaffs, varying in length from an inch-and-a-quarter to over three inches, were fastened to the cocks’ shanks.” And as we can see from the cropped Morton image below, the fights, or “mains,” were not just entertainment for men, but for women and children as well. 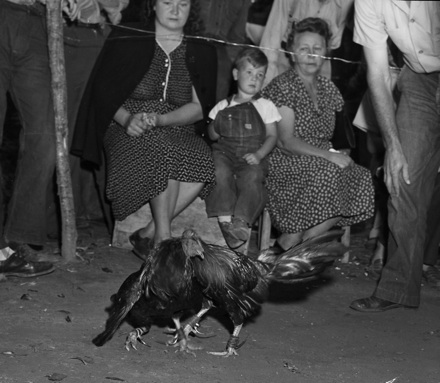 Judging from these various accounts and images, it seems that cockfighting practice changed little from the 18th century through the mid-20th. Although outlawed for quite some time, the practice has obviously continued for centuries, and remains a problem (as evidenced by Governor Easley’s 2005 signing of a bill to make cockfighting punishable as a felony).
Does anyone know the story behind these extraordinarily vivid Morton images? Where and when were they taken, and for what purpose?

11 thoughts on “Birds with "grit and saucy swagger"”