On December 7, 1908 Hugh MacRae—Hugh Morton’s grandfather—addressed a gathering at the Astor Hotel in New York City.  Located on Broadway at West 44th Street, the then-four-year-old hotel was a Beaux-Arts architectural gem built by William Waldorf Astor for $7 million ($160 to 180 million today) situated on Longacre (later Times) Square. MacRae’s audience was the North Carolina Society of New York, and the guest of honor was United States president-elect William Howard Taft.
The evening’s theme was “some of the large forces of southern progress” and the speaker’s table included W.W. Finley, president of the Southern Railway, who spoke on “The Railroad and the People”; James Y. Joyner, North Carolina Superintendent of Public Instruction, who conveyed “What the Public School is Doing”; and Dr. James H. Dillard, president of the Janes Board, who talked about “The Negro and His Training.” MacRae’s topic was “Bringing Immigrants to the South.” 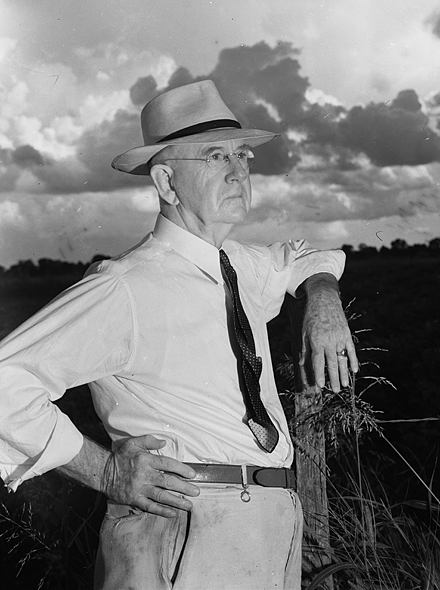 One hundred years later, MacRae’s topic is where my head has been planted for the past few months as I have been preparing an exhibit for the North Carolina Collection Gallery entitled, “Cultivating ‘The Great Winter Garden’: Immigrant Colonies in Eastern North Carolina, 1868-1940.”  This exhibit will be opening in early March, and two Hugh Morton images—both likely from the 1940s—will probably be displayed: an outdoor portrait of MacRae (cropped by me) likely dating from the 1940s, and a westward-looking bird’s-eye-view of Castle Hayne and vicinity, a community north of Wilmington originally named Spring Garden that was established by 1861 but later changed to Castle Hayne. 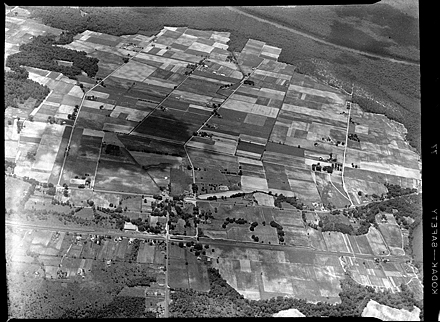 Shortly after the turn of the 19th century, MacRae mounted an effort to bring European immigrants to five agriculturally based colonies in Pender and New Hanover counties, one of which was situated at Castle Hayne.  MacRae described that colony, populated primarily with Hollanders, to his New York audience as having “six hundred people making a living, by intensive farming, on a tract of land which has a total of fifty acres.”  Morton’s aerial image probably falls just outside the date range of the exhibit, the view provides a unique perspective of the area.
I’ve made two trips to the region photographing a few remaining traces of the colonies that, in addition to Castle Hayne, include St. Helena, Marathon (near Castle Hayne) and Van Eeden along U.S. Route 117, and New Berlin (later renamed Delco), and Artesia on U.S. Route 74/76.  Elizabeth’s spring sojourn along U.S. Route 17 also touches on the Castle Hayne story, if you’re so inclined to wander off in that direction.  I’m making one more trip to that neck of the woods tomorrow for more research, with camera in hand.