Today, Monday, February 16, is Presidents’ Day (or “Washington’s Birthday,” in Virginia). Though most of America will be preoccupied with the Lincoln Bicentennial or stupefied by the great deals at their local auto dealerships, I would like to use this day to celebrate (or at least acknowledge) some Presidents who typically do not have bargains associated with them.

First, one that I scanned last fall, and stored away for this very holiday. It was found between some images of athletes standing outside, and women posing with flowers — you just never know where this guy will show up. 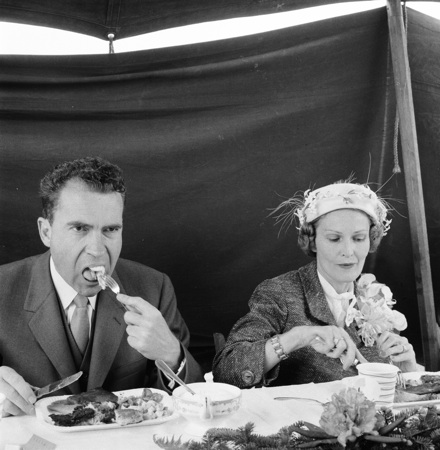 It’s a young, barely-jowled Richard Nixon in a tent, eating an unidentifiable platter of food in a most aggressive fashion. His wife, Pat, sits beside him and appears characteristically patient. Why is he here, and what is he doing (besides aggressively eating)? Pat Nixon appears in many other pictures that are probably from the annual Azalea Festival, and we know that the Nixons attended the 1958 Rhododendron Festival at Roan Mountain, TN. Perhaps one of these events explains why this young, earnest couple is featured in this picture.

Here is a picture of another President, this time fully vested in the title of Commander in Chief, and in a more Presidential pose. 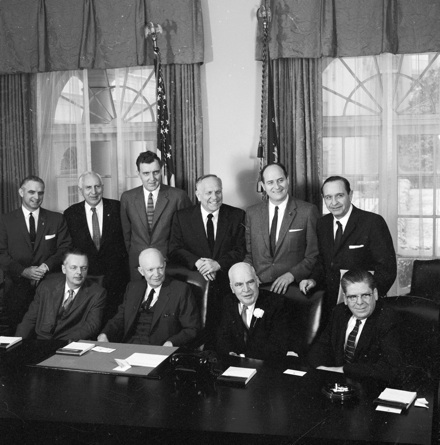 Yes, Dwight David Eisenhower, smiling grimly as the possibility of a national crisis looms: the 1957 desegregation of Little Rock’s Central High School and the subsequent unwillingness of Arkansas Governor Orval Faubus. That’s why Hugh Morton’s friend and NC Governor Luther Hodges is there — the President summoned a crack team of five Southern Governors to try and uphold the ruling of Brown vs. Board of Education in Arkansas while preventing riots.
Besides Eisenhower, Hodges, and a man that is most likely Faubus himself (second row, far right), the identities of the other men are unconfirmed. Who wants to help identify them? 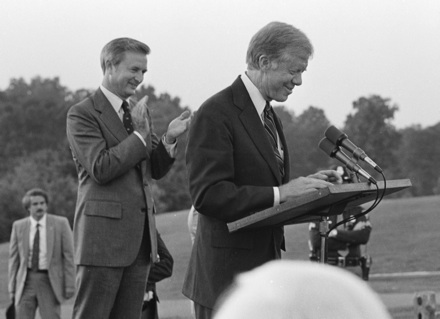 Here’s something more cheerful: a beaming President Jimmy Carter, on the 1980 re-election campaign trail in Winston-Salem’s Tanglewood Park hosted by the applauding Governor Jim Hunt. But all the good will couldn’t help Carter overcome the fuss over the Iran Hostage Crisis, a flagging economy, and a 28% approval rating . . . 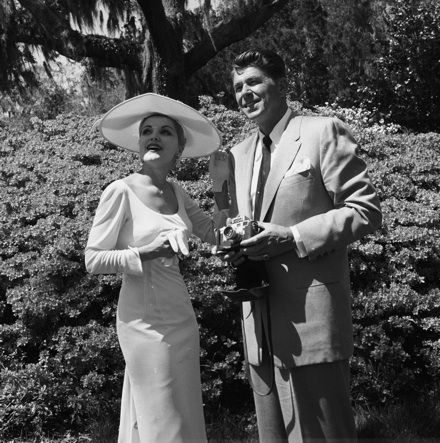 . . . and Carter instead had to vacate his post in 1981 for this affable, handsome Californian. Ronald Reagan, seen here in April 1959 at the Azalea Festival with Love Me Tender actress and Azalea Queen Deborah Paget, was at the time on the payroll of General Electric, hired to make motivational pro-G.E. speeches at various venues.
These pictures, taken individually, provide explicit and implicit narratives, but as a whole, what do they say about the American Presidency and the people who held its office? It is easier, instead, to see the narrative they present regarding their photographer, Hugh Morton: that he had access available to few, and the photographic ability to make something of it.