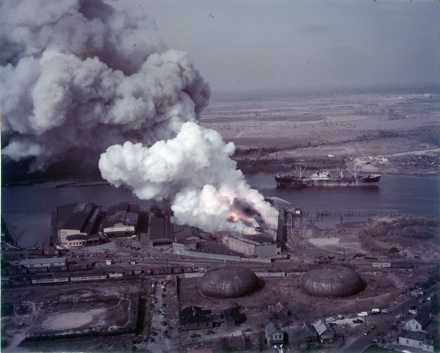 I know what you’re thinking — ANOTHER Wilmington disaster? But this one was brought to my attention by someone outside the library, Battalion Chief Chris Nelson of the Wilmington Fire Department. And, it occurred almost exactly 56 years ago, on March 9, 1953.
Chris, his department’s recently-appointed historian, emailed us a few weeks ago looking for Morton images (included above and below) he had seen published in the newspaper. He wanted them for an article he was writing for an upcoming issue of the N.C. Fire & Rescue Journal.
Chris reports that “in the past the Wilmington Fire Department didn’t put much emphasis on its history, and we are now looking to other resources for gathering photos, writings, etc. I am in the process of forming a nonprofit historical association to make obtaining items a little easier.”
We hope Chris can make a trip to Wilson Library sometime soon to look at our other Morton images of Wilmington fires — and help us identify them! 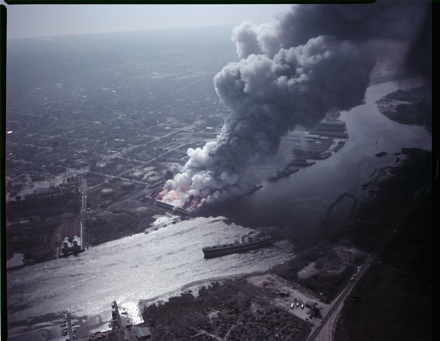 The 1953 fire occurred at the Wilmington Shipping Company, a riverfront warehouse and docking facility, and was part of a series of large warehouse and storage buildings located along the Cape Fear River. Chris noted that these Morton images were taken pretty early in the fire’s progress. Below is a summary of the event that he generously sent me.

Did you know…
One of the largest and costliest fires in the history of Wilmington occurred on March 9, 1953. The fire, which broke out in the western end of the Wilmington Terminal Nitrate Warehouse, quickly escalated with a series of explosions that rained molten sodium nitrate over the area. The fire quickly spread from the nitrate warehouse to adjoining buildings, which contained tobacco and sugar. Fire lines were abandoned and crews regrouped. If it had not been for the valiant efforts of the Atlantic III, the fire would have spread southward along the waterfront. As many as 21 firefighters and civilians were injured in the fire, with one civil succumbing to his injuries a few days later. Approximately $30 million worth of property was destroyed. Incidentally, one of the remaining warehouses was destroyed in 1996 at the Almont Shipping fire.