This semester I decided to take a Digital Photography class, both for my own enjoyment and to help me better understand Hugh Morton’s photos. The class has been very beneficial in teaching me about aperture, shutter speed, and film sensitivity. I’m now able to look at a Morton picture and say “Oh, that’s how he did that!” (Well, sometimes). For example, the three pictures below show the same full moon rising over the same mountain at different exposures.

But, which one did Hugh prefer? Did he want the darker picture that reflected more of the natural setting or did he like the lighter picture that showed more details? These are just a few of the questions that have arisen from taking this class.
For my first assignment I went to Grandfather Mountain to re-capture some of Morton’s photographs. Of course, mine came nowhere close to his. However, my photographs did start a debate in our class about whether a photograph can be a piece of art or just a pretty picture. Personally, I look at a photo and think, “Would I buy that to put on my wall?” (My professor didn’t have quite the same opinion). 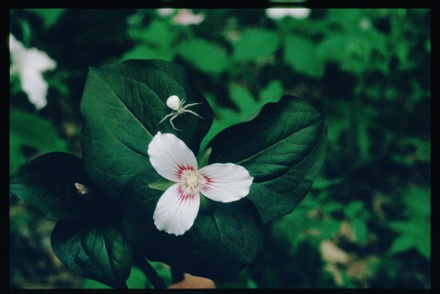 When you look at a photo, are you going to give it much thought? Will you look at it a second time? Does the image make you question what is being captured? For example, the picture of the trillium above is a pretty picture. The first time I looked at, that’s what I saw — I might not have given it a second look. But I did, and that’s when I noticed the spider sneaking around on the leaf, how its coloring blended in with the petals, and how its body mirrored the stigma (center) of the flower. Does that mean that this would be considered art? 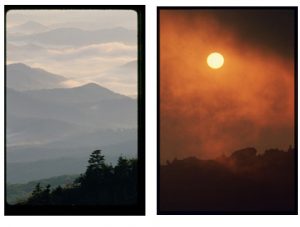 The two sunrise (or sunset) pictures above are definitely thought-provoking. One is very ethereal — light, airy, and promising. The other is more foreboding, dark, and sinister. Side by side, they are definitely striking and provoke contrasting images of good and evil. But if they weren’t next to each other, I don’t know if I would have looked twice. Does that make one a snapshot and the other art? Are they both just pretty pictures? 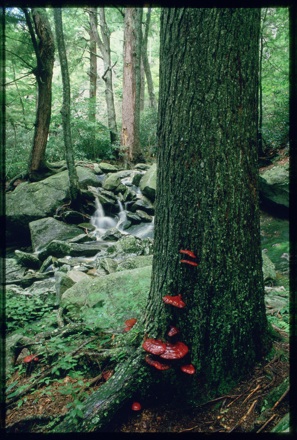 And here’s another thought regarding the art debate. If I told you that I took the above picture, and not Hugh Morton, does that make it less artistic? What if Ansel Adams had taken this picture? This debate could probably go on for quite a while. Everyone has their own definition of what makes a photograph a piece of art. I think the picture above is art — I would gladly put it on the wall of my living room. Others will look at it and just see a pretty snapshot. What do you think?