As I pick my way through images in the disturbingly large “People, Unidentified” pile, I find myself particularly troubled by the portraits of traditional musicians who remain nameless. Maybe it’s because I’m a musician myself, or because I know that these images may document little-known players — at any rate, this is where you, dear readers, come in. What can you tell us about the people shown below?
I have a feeling the woodcarver on the left must be a well-known individual. I’ve certainly seen his work before, but I don’t know his name. As for the banjo player on the right, the only clue I can offer is that his banjo is autographed by Roni Stoneman, of Hee-Haw fame. 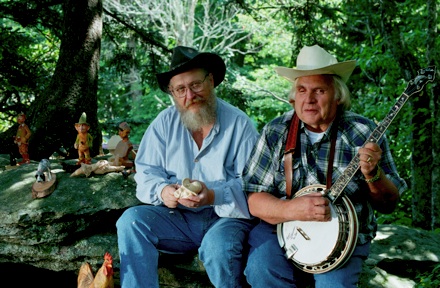 Here’s a very well-dressed gentleman playing a dulcimer with a turkey feather, as per Appalachian Mountain tradition . . . 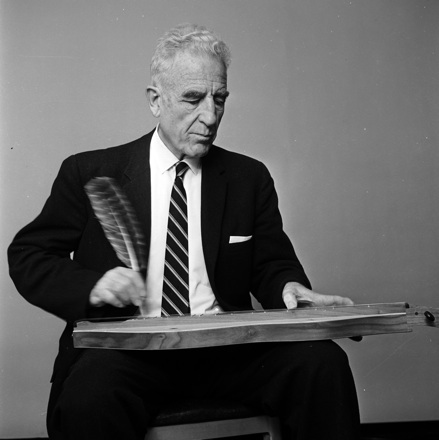 And another dulcimer player, not quite so well-dressed, sitting on a split rail fence with Grandfather Mountain behind him (not visible in this shot). This man’s dulcimer is a real work of art — hand painted with birds, flowers, and the letters “N, M, P,” and with hand carved pegs also in the shape of flowers (I think these are dogwoods, the North Carolina state flower) and birds (cardinals, the North Carolina state bird). 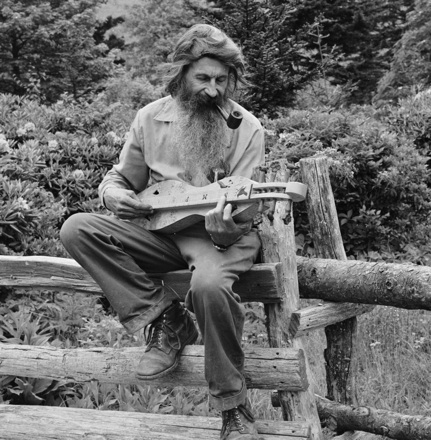 I’m uncertain as to whether the fiddler below might be Roby Coffey, brother of previously-blogged-about “Happy John” Coffey, or Shoner Benfield, previously identified in a “Singing on the Mountain” image. I’m leaning towards Benfield. But what about the young guitar player? (Apologies for the streak partially obscuring his face). 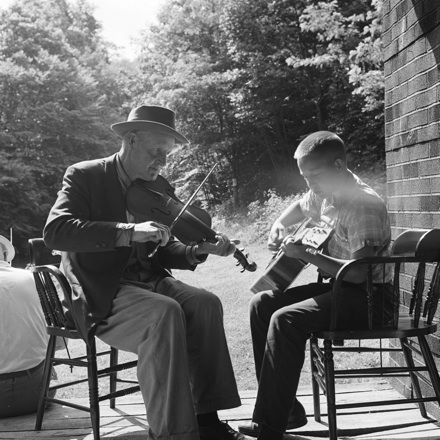 And finally, I’ll leave you with one of my favorite images of “Happy John” and his compatriots at “Singing on the Mountain.” Is that Roby to the right of Happy John? Does anyone know these other characters? 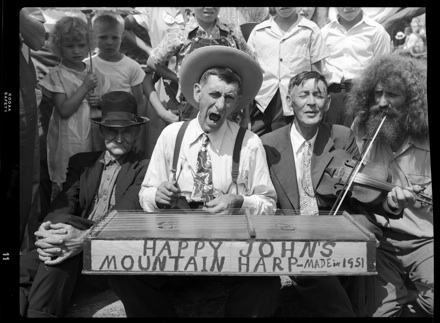 UPDATE 6/10/09: Many, many thanks to the commenters who have identified nearly all of the individuals above: Tom Wolfe and Floyd Gragg, Shoner Benfield and Randall Calloway, Edd Presnell. Only turkey feather man remains a mystery.
Now that we know Edd Presnell‘s name, we can find several resources having to do with him and his wife Nettie: 1) Nettie was featured on the poplar CD Appalachian Breakdown; you can hear brief clips of her playing on Amazon; 2) Edd was featured on UNC-TV’s Folkways program (the audio link on this page doesn’t work); 3) Both Edd and Nettie were interviewed in 1984 as part of the Southern Oral History Program (no transcript or audio available online, unfortunately).

13 thoughts on “Who Am I?–Folk Music Edition”