Note from Elizabeth: Last Friday was Amber’s last day at work on the Morton project. We’d like to thank her immensely for her dogged, patient, and insanely organized work sorting through the slides, and her charming blog posts. We wish her all the best with the rest of her education!

I’ve learned a lot over the last ten months working on this collection. I’ve learned about archival procedure, making many mistakes along the way (the method for organizing the slides changed probably four or five times before I found one that worked). I have found homes for hundreds of “orphan” slides, and processed more than 72,000 slides in total. I’ve also been able to travel to amazing places: Grandfather Mountain, the Fern Grottoes of Hawaii, the McNeil River in Alaska, Galilee at Sunrise, Puerto Rican beaches, and Milford Sound in New Zealand. 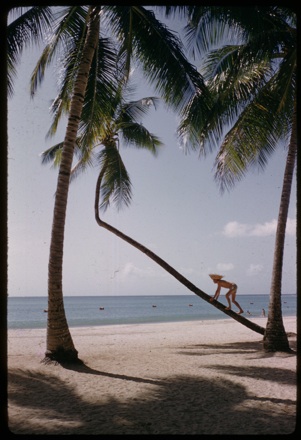 I’ve probably learned the most, though, about photography. Hugh Morton was an artist, crafting amazing pictures out of everyday objects. On my two visits to Grandfather Mountain, everyone shared with me tips and tricks Hugh had taught them for taking great pictures. Now, I don’t feel I am betraying any of these secrets, because Hugh took all of the following pictures to document his process. 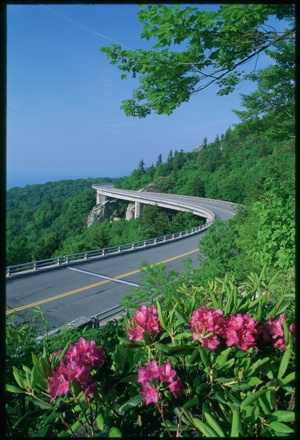 When I saw the Linn Cove Viaduct, I thought it was a pretty scene. But it lacked something that Hugh was able to capture. (Elizabeth touched on this in a previous post about her visit to the Mountain). I heard from two different people at Grandfather how Hugh would have helpers bring potted plants or hold branches of fall leaves to frame that perfect shot. Below, we can see how he positioned a rhododendron stem just out of frame to create the resulting beautiful picture above. 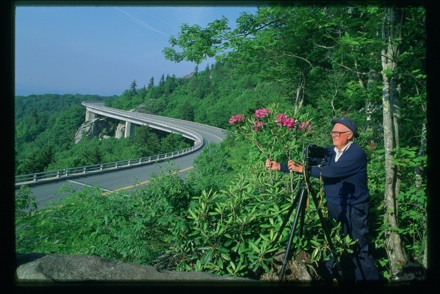 I also found slides of how he captured his amazing hummingbird pictures. I always wondered how he was in the right place at the right moment to capture that hummingbird going to that flower. Turns out it wasn’t always serendipity! The shot below shows how he set everything up on his deck at home. He would lure the hummingbirds in with a feeder, then add the bottle holding the flower. The feeder would be removed, leaving only the thistle blossom. (His camera was inside pointed out the sliding glass doors so that he wouldn’t scare the little darlings away). He could then snap as many shots as possible without having to wait all day for the right moment. 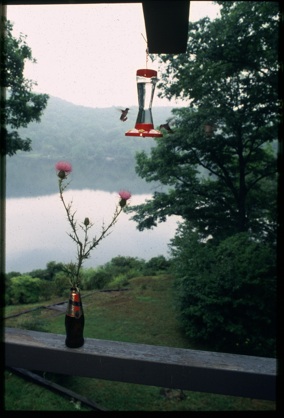 Some of my favorite shots of the bears were from when they had climbed to the top of the rock in their habitat or on a cliff by the Swinging Bridge. I thought they had done that on their own, maybe to enjoy the majestic view. Nope. Hugh would have a helper lay a trail of peanut butter up the rock for the bear to follow. Often, there would be someone just out of sight luring the bear with more treats. If you look at those pictures now, you can see that the bears are usually peering over the ledge at something. 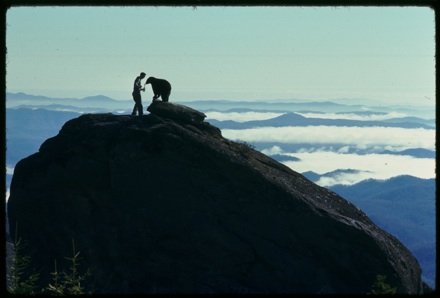 On my last trip to the Mountain, I had to laugh when I saw a Morton postcard showing a beautiful red fox running through the snow. It was faked! I’ve seen pictures of that same fox, in that same pose, in many different settings — there’s even one of it chasing a taxidermied rabbit! And Julia Morton also shared with us that Hugh carried around moose antlers in Alaska to add scenic perspective. 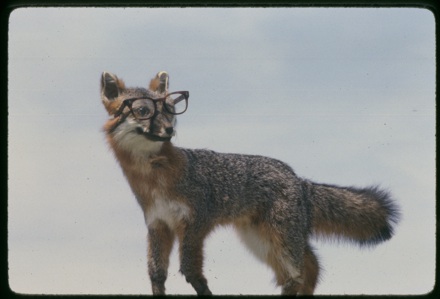 So, to be a scenic photographer of Hugh’s caliber, I need helpers to stage the scene with potted plants and tree branches. I need some sort of treat to entice the models in my pictures (whether man or beast). And I need a stuffed fox. Oh, and some moose antlers.
I’m going to need a bigger camera bag.

5 thoughts on “A Magician's Secrets Revealed!”