—from I Remember, by Joe Clark 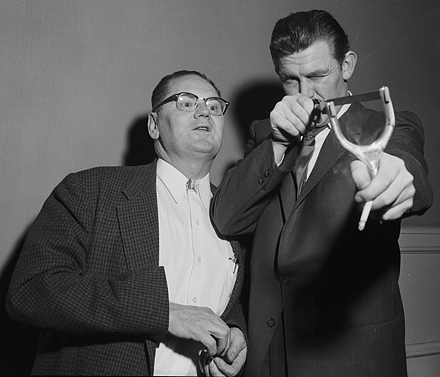 The photograph above (cropped) of Andy Griffith aiming a slingshot while holding a cigarette in the same hand was among the first negatives from the Morton collection that I scanned soon after the collection arrived, and it has remained one of my favorites. It just seems so funny to me to have both in your hand at the same time. I’ve used that photograph in public presentations several times and have asked most audiences if anyone knew who the fellow on the left might be. No one ever came up with his name.
Elizabeth has been egging me to write more posts, and she thought the recently enacted North Carolina law banning indoor smoking would be a good stepping off point for an entry on some of Hugh Morton’s scenic landscapes of tobacco fields. The Andy Griffith image, however, quickly popped into my head so I asked her and David if there might be some other interesting indoor smoking images in the collection. Neither could recall any, but Elizabeth pointed me to Morton’s book Making a Difference in North Carolina to see if there might be some in there.
Other than an unlit cigar, I did not find any smoking photographs. But on page 283 . . . Eureka! . . . I saw a group photograph with then Governor Luther H. Hodges, Sr. and Andy Griffith—not of them smoking, but including someone standing next to Griffith’s left side who is completely cropped out of the photograph except for his coat sleeve and the tiniest corner of his eyeglasses. That sliver immediately triggered my brain cells that are associated with the Griffith slingshot image. Looking back through the scanned negatives, David pulled up the image used for the book. Here’s an uncropped version of the group photograph: 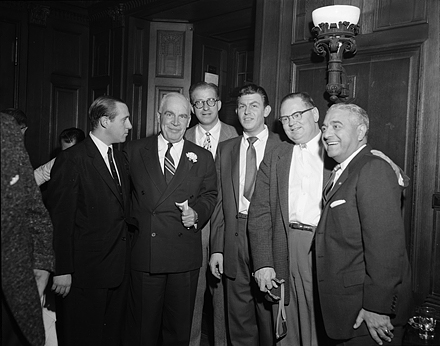 Notice the slingshot in the hand of our mystery gentleman.
The caption for the photograph in Making a Difference describes the gathered posers as members of the Honorary Tar Heels in New York City, so off I went to the Library’s catalog. It revealed a record for a booklet in the amazingly deep North Carolina Collection—The Honorary Tar Heels 1946-1967: A Pictorial History written by Bill Sharpe. Inside the booklet is a group portrait of the attendees of their 21 January 1956 dinner in New York City, and standing next to Hugh Morton, with his armed wrapped around him, is the mystery man—identified as “Joe Clark, H.B.S.S., Detroit, Michigan.”
H.B.S.S?
“Googling” that acronym led to a web page at thefreedictionary.com that presents five possible definitions. “Hank’s Balanced Salt Solution” didn’t apply, nor did the next few, but wait . . . the last one?  Well that would be “Hill Billy Snap Shooter (Joe Clark photography book)” . . . and this mystery enters into the realm of the surreal!!! That revelation explains another photograph in the collection, shown below, with our now identified Joe Clark aiming to shoot with a camera rather than a slingshot.  That’s Hugh Morton on the right, . . . and that’s Bill Sharpe in the middle, smoking indoors in New York City. 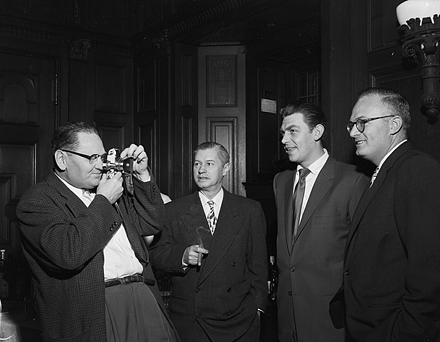 Once again I cannot stump the North Carolina Collection, which has Clark’s 1969 book, I Remember, a collection of his poems and photographs. And there it is, on the spine and the title page, “Joe Clark HBSS.”  Luther Hodges, Sr. signed the inside front endpaper of the book in 1970, and on the next page is written “Joe Clark—the author is an old friend and an Honorary Tar Heel.”  Davis Library pitched in, too, with Clark’s earlier book, Back Home, published in 1965. The front endpaper of that book depicts Clark with a camera over his shoulder—and a slingshot in his hands. More research revealed Clark’s other books: Detroit, God’s Greatest City published in 1962, Lynchburg (1971), Tennessee Hill Folk (1973), and Up the Hollow from Lynchburg (1975). The Bentley Library at the University of Michigan has a modest collection of Clarke’s published works and a videotape interview of him featuring his son, Junebug Clark.
Another Morton collection mystery solved! Oh, one last thing . . . .  Since the group portrait in Making a Difference in North Carolina is cropped to the right of Griffith, the above uncropped version unveils a gentleman on the far right. That’s photographer Joe Costa.
As for the rest of the Honorary Tar Heels story? Well, there are more photographs in the Morton collection of this and other of the group’s events. Looks like Elizabeth won’t have to egg me on for another post!