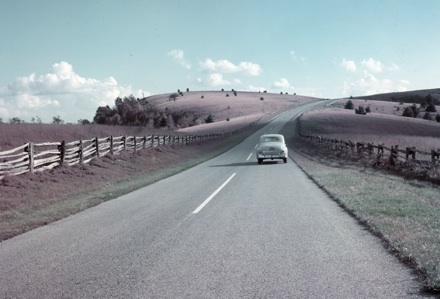 Exciting news! A new two-year digital publishing initiative called Driving through Time: The Digital Blue Ridge Parkway in North Carolina has been approved for funding by the Library Services and Technology Act (LSTA). Work on the new collection begins July 1, and will be heavily based on findings and experimentation from other GIS (Geographic Information Systems)-based projects developed by UNC Libraries and their partners: Going to the Show and North Carolina Maps. (By the way, if you haven’t yet explored these collections, you simply must).
We’re especially thrilled because Driving through Time will include some of Hugh Morton’s Parkway photographs. Here’s a summary of the project provided by the Carolina Digital Library & Archives:

Driving through Time: The Digital Blue Ridge Parkway in North Carolina will present an innovative, visually- and spatially-based model for documenting the twentieth-century history of a seventeen-county section of the North Carolina mountains. The project will feature historic maps, photographs, postcards, government documents, and newspaper clippings, each of which will be assigned geographic coordinates so that it can be viewed on a map, enabling users to visualize and analyze the impact of the Blue Ridge Parkway on the people and landscape in western North Carolina.
Primary sources will be drawn from the collections of the UNC-Chapel Hill University Library, the Blue Ridge Parkway Headquarters, and the North Carolina State Archives. These materials are especially significant in that they document one of North Carolina’s most popular tourist attractions, but also in the way that they help to illuminate the way that the Blue Ridge Parkway transformed the communities through which it passed.  In addition to the digitized primary sources, the project will include scholarly analyses of aspects of the development of the Blue Ridge Parkway in North Carolina, and an educational component designed for K-12 teachers and students.
Using digital technologies to open a new window on the history of the Parkway and its region is especially timely considering the approach of the Parkway’s 75th anniversary in 2010 and the National Park Service’s 100th anniversary in 2016.  This project is certain to be a valuable and popular resource for millions of tourists as well as for teachers, students, and historians, both within North Carolina and beyond.