In the post, “Don’t Smoke Your Eye Out” I related the course of events that led to identifying Joe Clark, HBSS, who up to that point was an unidentified person in a Hugh Morton photograph, standing next to Andy Griffith as he aimed a slingshot while simultaneously holding a cigarette. The above photograph, a group portrait of the 1956 Honorary Tar Heels dinner attendees in New York City, was a key to identifying Clark (second from the right standing next to Hugh Morton). I didn’t know at the time I wrote the post that the original negative was in the collection, so I present it to you in this post. Bob Garland (on the far left holding a camera) likely made the photograph, as his name is on the negative. 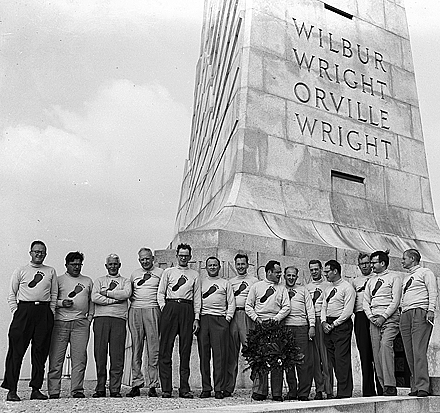 This post will introduce you to the Honorary Tar Heels (HTH), a lose-knit social club formed in 1946. But first, a special treat: in a comment for “Don’t Smoke Your Eye Out,” Julia Morton mentioned a photograph of Joe Clark standing on the top of the Mile High Swinging Bridge at Grandfather Mountain. We found the negative; daring stuff!!! 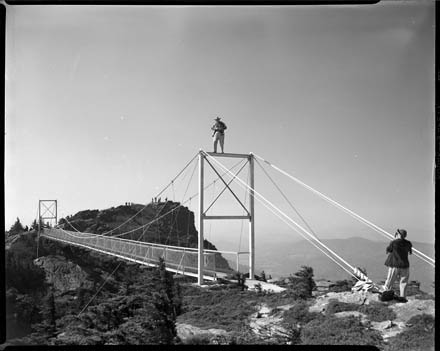 The Honorary Tar Heels began in 1946. During that year, Curtis Publishing (of Saturday Evening Post and Ladies Home Journal fame) sent writer Francis X. Martinez and photographer William S. Springfield to North Carolina to work on a “red-herring” (pre-publication) edition of a magazine to be called Holiday.  Bill Sharpe, head of the Division of Advertising and News of the North Carolina Department of Conservation and Development, guided the pair from one end of North Carolina to the other.  During their three-week sojourn, Springfield took to imitating the locals—eating their food, drinking their liquor, and imitating their dialects.  After they left, Sharpe asked Governor R. Gregg Cherry to sign a “corny little proclamation” making Springfield an “Honorary Tar Heel,” to which Cherry obliged.  Springfield proudly showed his certificate around and before too long other visiting photographers and writers began requesting the appellation.

Sharpe knew Joe Massoletti, a New York City restauranteur with a cottage at Hatteras, and the two shared several mutual friends among the newly anointed HTHs.  Massoletti suggested to Sharpe that they be invited to Hatteras sometime in 1947 for a weekend of fishing.  To make it a festive event, Massoletti supplied a chef and a waiter from New York, and had food flown from New York to Manteo and then boated on the Pamlico Sound to Hatteras.  A group of thirteen HTHs, including Massoletti as host, attended the gathering that included writers and photographers from the New York Times, Life Magazine, and National Geographic.  A group portrait of those who attended, probably made by Holiday staff photographer Al DeLardi, can be found on the cover of The Honorary Tar Heels, 1946-1967: A Pictorial History.  Governor Cherry also attended, although he arrived after the photographs were shot.

Members of the budding affiliation continued to meet two or three times a year—most likely through the efforts of Sharpe as a means to maintain his media connections—at places such as Nags Head, Cataloochee Ranch, Lake Logan, Morehead City, Wrightsville, Linville, New York, Washington, and Philadelphia. 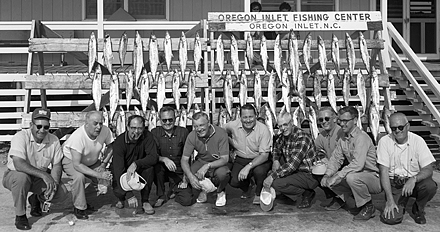 But what of Hugh Morton and Holiday, the publication that served as the unlikely catalyst for the HTH?

Martinez and Stringfield teamed up to produce “Village of Stars,” an article about the Lost Colony drama on Roanoke Island, for the fourth issue of Holiday published in June 1946.  Though not a wide-ranging essay on the state, their three-week trek may have laid the ground work for the magazine’s October 1947 issue that featured North Carolina in a lengthy article written by News and Observer editor Jonathan Daniels.  The article featured photographs by DeLardi, one of which depicted four men playing cards while two men examine a fishing rod and reel next to a fireplace inside Massoletti’s cottage and may well be members of the HTHs.  The heavily illustrated twenty-six page article also included images by several photographers, including eleven by Hugh Morton.

4 thoughts on “The Honorary Tar Heels”