Note from Elizabeth: This is the fourth post researched and written by volunteer Jack Hilliard. Ten years ago today, on July 9, 1999, the move of the Cape Hatteras Lighthouse to its new location was completed.

It wasn’t difficult to recognize Hugh Morton when he came to Greensboro in the spring of 1982 for the annual Governor’s Conference on Travel and Tourism. He was the gentleman in the Carolina blue jacket and the yellow tie embroidered with an image of the Hatteras Lighthouse.  His lapel button identified him as “Keeper of the Light.” 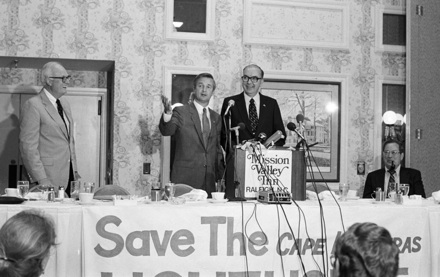 A year before, Morton had formed the “Save the Cape Hatteras Lighthouse Committee,” in response to the growing concerns about the safety of the 129-year-old structure. His committee read like a who’s who in North Carolina: Morton was even able to get his friends (and political foes) Democratic Governor Jim Hunt and Republican Senator Jesse Helms to lead the project. (The two would engage in a 1984 Senate contest that Newsweek magazine called “the most colorful, expensive, and nasty Senate contest in the country,” but in 1981 they were on the same team). 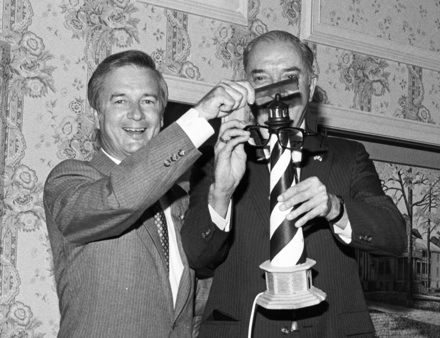 This powerful group was able to raise $500,000 in a very short time, with Morton using some of the same techniques that he had used 20 years before to bring the Battleship USS North Carolina to Wilmington. The money was used for sandbags, sand fences, and Seascape synthetic seaweed. All of these measures were extremely helpful in building up the beach around the lighthouse.

Morton and Hunt were able to literally measure their success. In an interview for the December, 1997 issue of Lighthouse Digest magazine, Morton said:

“Governor Hunt and I took a tape measure; one of us stood at the base of the light and the other took the tape to the water’s edge–and it was not low tide either. The tape showed it was 310 feet from the water to the tower–quite an improvement over the less than 100-feet when the project started. The seaweed had trapped the sand moving south and built up the land under the water as well as the beach itself.” 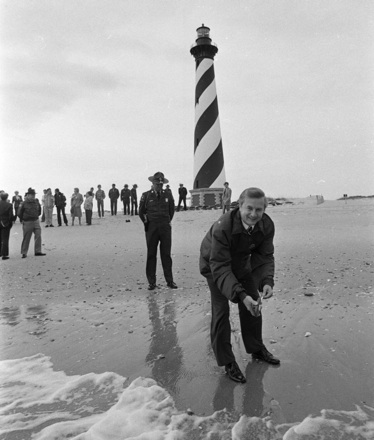 Morton and his committee were convinced that the synthetic seaweed idea had merit, but they took this possible solution a step further. Members of the committee and a group of community leaders and journalists flew to Michigan to consult with Dick Holmberg, who had devised a series of underwater stabilizers that act like speed bumps slowing down the current and building up the beach. Holmberg thought this system could save the 208-foot Hatteras Lighthouse, and that it could be done for about 2 million dollars. But the National Park Service (which had taken over the lighthouse in 1936) wasn’t buying it, and continued to look into other options over the next seven years.

In 1989, Robert Baker (Regional Director of the National Park Service in Atlanta) announced that the NPS would follow the opinion of the National Academy of Sciences and begin plans to relocate the lighthouse. The decision angered Morton and members of the “Save The Lighthouse Committee.” The stage was set for the “battle for the beacon.” 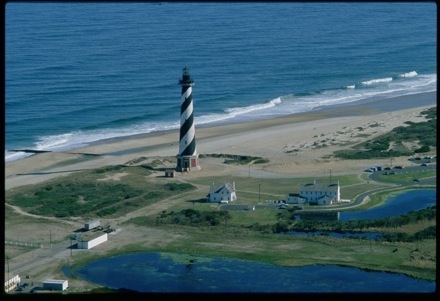 Ironically, both sides wanted the same thing — to save the Lighthouse — but differed on how to achieve it. Morton’s committee listed three reasons for not moving: (1) the committee was convinced the structure could be saved for a little over 2 million private dollars, versus 12 million in taxpayer dollars; (2) the movement could cause tremendous stress on the old brick structure, and (3) taking the lighthouse away from its historic seaside location would destroy its promotional and scenic value. (See a summary of Morton’s position here).

For almost 10 more years the two factions went back and forth, all while the Atlantic continued to take its toll. In a spring 1997 poll run by Hatteras Monitor magazine, voters supported saving it where it was by a 10 to 1 ratio; but President Clinton liked the idea of moving, so he appointed his chief of staff, Erskine Bowles, to head the White House efforts. On October 16, 1998, Senator Lauch Faircloth (R-NC) announced that he had been successful in securing 12 million dollars in federal funds for the move.

On June 17, 1999, it was time to move the Lighthouse out of harm’s way. (At the end of day one, the move had covered just ten feet, two inches!). The move was completed on day 22, Friday, July 9 (10 years ago today), at 1:23 PM. Finally, on November 13, the Cape Hatteras Lighthouse resumed its duties watching over the “Graveyard of the Atlantic.” (Note: if Morton images of the Lighthouse move exist, we have not yet located them). 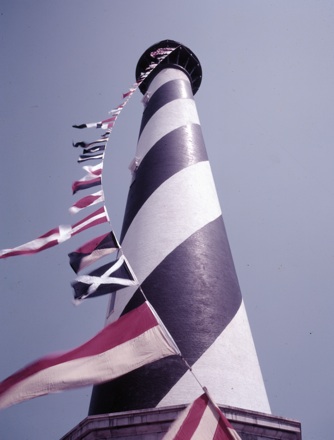 On April 1, 2003, Hugh Morton returned to Greensboro with his slide show for a meeting of UNCG’s Friends of the Library. Morton was introduced by his good friend Luther Hodges, Jr., who said in his introductory remarks, “I only know of two projects where [Morton] didn’t live up to his own expectations. . . his run for governor and his attempt to keep the Cape Hatteras Lighthouse in its seaside location.”

In October of 2003, Morton was a guest on UNC-TV’s “Biographical Conversations,” and was asked about his role in the Lighthouse saga. Said Morton, “I think we made a mistake in moving it, but I’m really glad it didn’t break apart during the move.” He added, “If you are a bureaucrat and you spend 12 million dollars instead of 2 million, then that makes you a better bureaucrat.”

When asked about the new location for the Hatteras light, Morton had this to say:

“. . . There are three prominent United States coastal landmarks in a class by themselves that are known around the world: the Statue of Liberty, the Golden Gate Bridge, and the Cape Hatteras Lighthouse . . . Now, our lighthouse is half a mile away [from the ocean], back in the bushes by a cell tower . . . “

10 thoughts on “Battle for the Beacon”