“Today’s quiz: what had 2000 kilowatts, created devotees called ‘wooshies’, was the largest of its kind in the world, and didn’t work?
Answer: the U.S. Department of Energy wind-powered electric generator constructed on Howard’s Knob in October, 1978.”

–from the Mountain Times 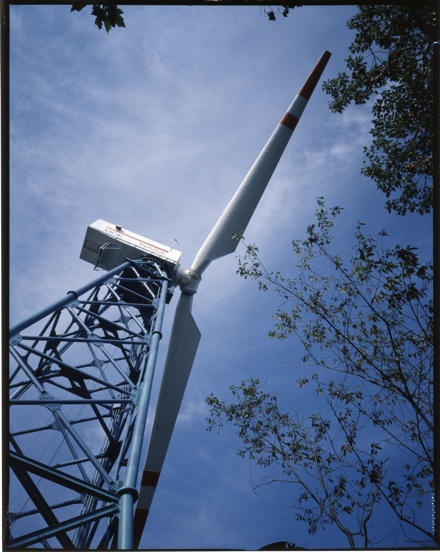 Add this to the canon of “World’s Largest” in North Carolina (at least for a time): Boone’s famous experiment in wind power, dedicated thirty years ago this week (on July 12, 1979). As a Boone native (albeit a young one at that point), I certainly remember the windmill, but wasn’t aware of the full background of the project, or of the “cult” that formed around it — a Mountain Times feature, “The 20th Century: High Country History,” provides the relevant details, and Blue Ridge blog presents additional photos and remembrances.
The windmill surely created a buzz in Boone for a brief time — perhaps a bit too much buzz, as reported by Time magazine. Concerns over the windmill’s noise and ineffectiveness (plus the Reagan administration’s eventual pulling of funding for alternative energy research) ultimately doomed the project, and the windmill was taken down in 1983. I’m a little unclear on what, if any, role the Mountain Ridge Protection Act of 1983 (aka the “Ridge Law,” an effort in which Hugh Morton was heavily involved) played in all of this, other than that it exempted windmills from its ban on tall structures along the ridgeline. Can anyone fill in some of those details?
Meanwhile, NC windmills are back in the news today, as the General Assembly debates a possible windmill ban in the mountains — a ban it appears the majority of the public opposes. The NC Wind Energy website provides a wealth of information on the issue. I wonder what Morton’s position would have been?