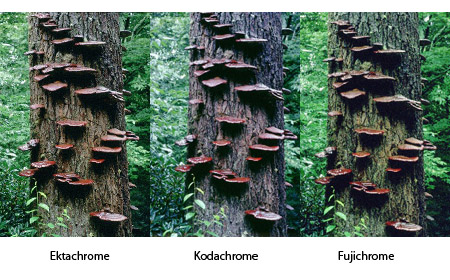 Maybe only photographers would think of this question, but if Paul Simon’s verdant lyric about Kodachrome giving us “the greens of summer” was true, then why, oh why, was Fujichrome invented?  At the risk oversimplification, let’s take a look at that question. After all, in his own way, Hugh Morton did!
The demise of Kodak’s Kodachrome film has made the media rounds recently, and soon after the announcement I thought of writing a post about it (because Morton first used Kodachrome in the early 1950s).
Then, we rediscovered a set of 35mm slides that Morton made where he photographed several subjects with three different films, including Kodachrome. Two of those scenes are represented here as side-by-side scans. Morton’s approach was likely loading three cameras with three different films, setting up a tripod, then swapping out the cameras to make three separate exposures. He picked several scenes until he completed the three rolls of film, then processed all three rolls and compared the results, scene by scene.
To keep this from turning into a complicated photography lesson, let’s just note that manufacturers make different films with different “extended sensitivities.” That means that one film may be more sensitive to reds and yellows, for example, and another film may be more sensitive to greens and blues. This is the case between Kodachrome and Fujichrome, and Kodachrome and Ektachrome. Can you see the differences between the films in the two examples? 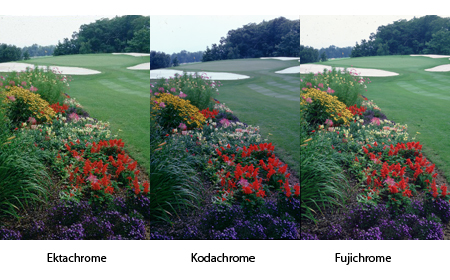 When the news of Kodachrome’s death first came out, I had my natural kicked-in-the-gut reaction I get when another hallmark of film photography comes to its fateful end. A friend and I were ruefully exchanging emails discussing Kodachrome’s death blow, and I asked, “When is the last time you shot Kodachrome?” For both of us, the answer was quite a long time ago—so long ago that neither of us could remember precisely.  In fact, digital photography has meant that I haven’t shot any type of film in about five years.
One of the standout benefits of digital photography over film photography is its ability to compensate for different types of lighting or adjust the rendering of colors in a particular scene from exposure to exposure, rather than from roll to roll. Depending on your camera and/or imaging software, you can make one exposure, then walk to your computer and easily create variations from that one image that would look similar to all three of Morton’s film examples—and more. This is one more reason that digital photograhy is supplanting film photography, and a contributing factor to the end of Kodachrome’s fabled history.

10 thoughts on “The Greens of Summer?”