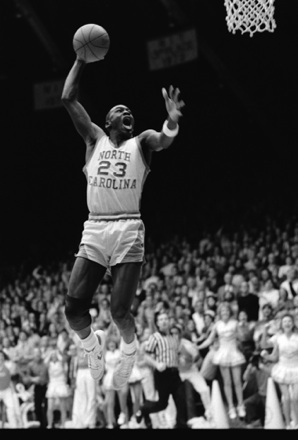 Though you wouldn’t know it from looking at today’s Daily Tar Heel, Hugh Morton took this legendary photo of the legendary Michael Jordan. It’s maybe Morton’s best-known (and least-credited) image, and appears on p. 191 of Hugh Morton’s North Carolina. As Morton tells it,

Michael Jordan was airborne in Carmichael Auditorium against Virginia, and this is my most published action shot of him at Carolina. I told him ahead of time that I hoped he would have a good game, and as he brushed by after making this basket he asked, “Was that good enough?”

Good enough and then some! Some say Jordan was the best that ever played. Certainly good enough to insure his induction into the Naismith Memorial Basketball Hall of Fame today, just as soon as he became eligible.