This is a question I was asking myself from the time I started working on the Morton collection until recently, when I happily discovered the answer. A particular batch of Morton negatives labeled “Singleton C. Anderson, Rocky Pt.” caught my attention when I was making my first survey of Morton’s photographs. I noticed them because 1) they were striking black-and-white images from the circa 1950 period, and 2) they depicted African Americans in a non-athletic setting (somewhat unusual in Morton’s work). 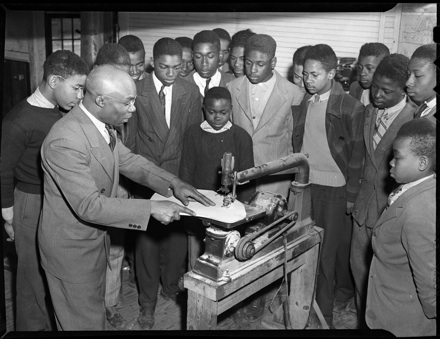 Some quick Google searches at the time were fruitless; I suspected the images showed scenes from a Rosenwald School, but I didn’t have time to look into it any further. But the images, and Anderson, stuck with me. I just had a feeling they were important. So when I came upon them again recently during processing, I figured “what the heck,” and tried another Google search. Jackpot!
The site I found, Under the Kudzu, is run by educator and writer Claudia Stack, who is now in the process of creating a feature-length documentary film focused on the Rosenwald school movement as shown through two schools in Pender County, NC: the Canetuck Rosenwald School, a primary school, and the Pender County Training School, a high school. PCTS was located in, yes, Rocky Point. I emailed Claudia immediately and attached jpegs of the images included in this blog post. The next day, I got this reply:

I am ASTOUNDED at these images . . . I have been researching PCTS and Singleton C. Anderson’s profound impact on the region for the past six years, but images are very hard to come by. That is partly, I think, because he was a humble man, and partly because a tragic house fire claimed the life of his wife, Vanetta Anderson, and also all of their papers and pictures.

So, who in fact WAS Singleton C. Anderson?

Here’s the short answer, culled from Claudia’s notes: Singleton C. Anderson was born Feb. 22, 1896 in Columbia, VA, educated at the Hampton Institute and came to the Pender County Training School (which had been founded in 1917) in the early 1920s to teach agriculture, wood working, metal working, masonry, and animal husbandry. Local families were distrustful at first, thinking they didn’t need any help teaching farming to their children. But Anderson won them over with his energy and abilities: “The story goes that when people saw how hard he worked and how skilled he was, they began to see the value of what he had to teach,” writes Claudia. 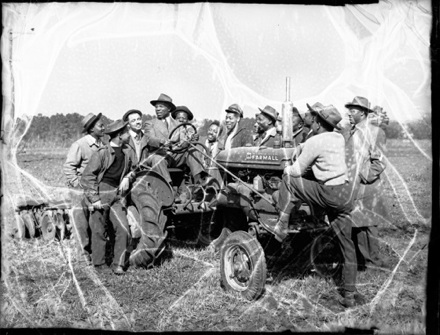 Anderson also contributed hugely to the surrounding community by leading home-building and landscaping programs — he is credited with 160 “home-raisings,” meaning the landowner would buy the materials, and Anderson and his students would build the house at no additional cost. 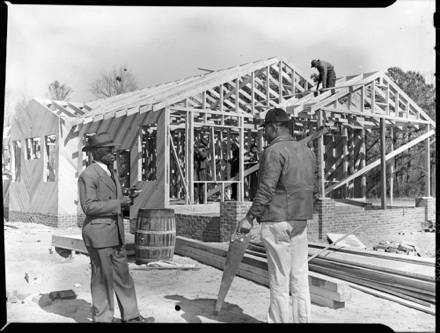 The impact of Anderson, the PCTS, and the Rosenwald School movement will be fully explored in Claudia’s film and through an exciting event to be held at UNC-Wilmington on November 13, the Rosenwald School History Awareness Conference, where scholars, preservationists, alumni, and community members will gather to discuss African American education during segregation. (See Claudia’s thoughtful October 2008 piece from the Star News for more on this topic).
One question remains: why did Hugh Morton take these rare photos of Anderson? Was he on assignment from a newspaper or other publication? It seems doubtful he would have been pursuing his own interests. Was there, as Stephen suggested to me, a connection between Anderson and Morton’s grandfather Hugh MacRae, who was also involved in agriculture in Pender County? Did Anderson himself initiate the photos, for some purpose of his own? Claudia reported that she showed these images to a former student of Anderson’s, who commented, “those are church hats” — meaning, Claudia thinks, that the photo ops seem to have been staged.
It just goes to show how one man with a camera, in the right place at the right time (as Hugh Morton so often was), can create documents of great, and sometimes unexpected, significance.

9 thoughts on “Who is Singleton Anderson?”