Note from Elizabeth: Today is University Day here at UNC-Chapel Hill, the oldest state university in the country. To help us celebrate, volunteer Jack Hilliard remembers some University Days past. (Further recollections of the Kennedy event and the full text of his speech can be found on the fabulous Chapel Hill Memories blog).

The TV viewing room on the first floor of Teague Dorm at UNC was small, but a dozen or so of us crowded our way inside. We had come to watch a speech by President John F. Kennedy, one that would be extremely important to several of us who were scheduled to graduate in less than six months. It was October 22, 1962, and we were being “recruited” by the big four—not Carolina, Duke  State, and Wake, but the other big four—Army, Navy, Air Force, and Marines. As I sat waiting for the address, my mind wandered back to one year and 10 days before, when I sat waiting for this same President to speak. 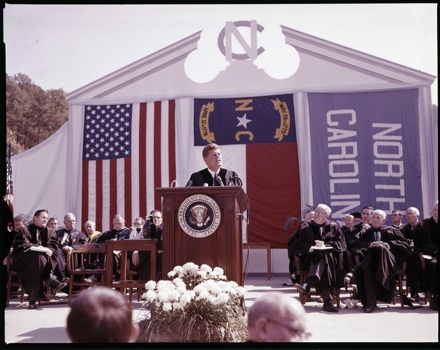 October 12, 1961 was a beautiful fall day in Chapel Hill. About 32,000 of us had gathered in Kenan Stadium to observe University Day 1961 — the University’s 168th birthday. The highlight of the morning was an address by President John Kennedy, scheduled for 11 AM. Thirty minutes before the President arrived, the official 40-person White House Press Corp arrived and joined the local media in scrambling for good viewing positions. Among those scramblers was a man who had covered University events for more than 20 years: Hugh Morton.

At 11:05 AM, President Kennedy’s caravan arrived at the west end of the stadium, having completed a journey down Highway 54, which had been closed and well guarded by 50 North Carolina Highway Patrolmen. The President, with Governor Terry Sanford at his side, rode in an open top limousine. At 11:12, the academic procession, led by Faculty Marshal John Coriden Lyons, started toward the east end of Kenan Stadium. Greensboro Record staff writer Charlie Hamilton described what he saw:

“A warm sun whose heat was cooled intermittently by soft breezes, beat down upon the scene, as the President, in cap and gown and flanked by state, national, and university officials, made his way beneath the west goal post and down the gridiron to the speaker’s rostrum.”

Once in place, and following the National Anthem and the invocation, University President Dr. William Friday introduced the President. In his 13-minute address, Kennedy spoke of North Carolina’s “enlightened” and “progressive” leaders and the University’s great “liberal tradition.” Then he added: “I am proud as President of the United States, and as a graduate of a small land grant college in Massachusetts, Harvard University, to come to this center of education.” Following the speech, Sanford and Kennedy were awarded Honorary Degrees. As the ceremony came to a close, Robert Stewart Powell, Master Bell Ringer, provided music from the Morehead-Patterson Bell Tower. 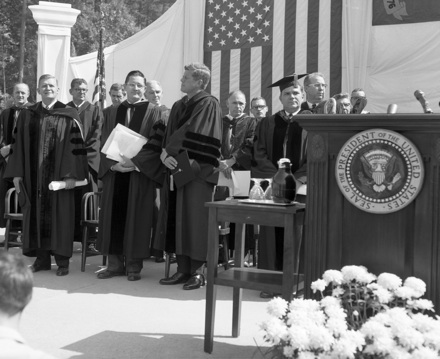 As that same Bell Tower struck 7 PM, I was brought back to the present by the Presidential Seal on the small black and white screen and the announcer saying, “local programming will not be seen tonight so that we may bring you an address by the President of the United States.” (That meant that viewers in the Triad would not see “The Grand Ole Opry,” and viewers in the Triangle would miss an episode of “Hazel”).

Kennedy would then give the United States’ response to what would become known as the Cuban Missile Crisis. Three months later I would graduate and sign on for temporary employment with the US Army at Fort Knox, Kentucky. It was there, on November 22, 1963, when a protocol officer interrupted our class on the M-60 machine gun to tell of the tragic event that had occurred earlier that day in Dallas.

Thirty-two years and 7 presidents later, the University celebrated another birthday with another presidential visit. On October 12, 1993, UNC celebrated its 200th birthday, with President William Jefferson Clinton as honored guest. This time, 55,000 jammed into Kenan Stadium, and a new generation of local media and White House Press Corp again scrambled for good viewing positions, with one familiar figure among the scramblers: Hugh Morton. 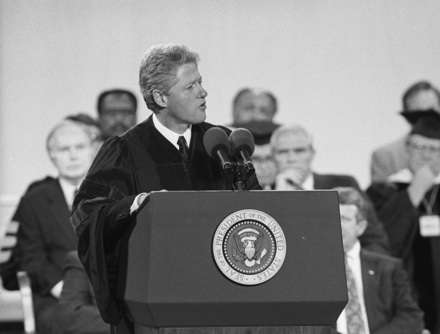 President Clinton’s 35-minute speech was interrupted more than 25 times with applause, but the biggest reaction came when he said:

“I must say I have thought for a long time about what it might feel like to be in a vast crowd of North Carolinians and have them do something besides root against one of my athletic teams from Arkansas.”

“Tonight we have rubbed shoulders with history, and we stand with you, Mr. President, to face a future which exceeds our wildest imaginings.”

3 thoughts on “‘Rubbing Shoulders With History’”