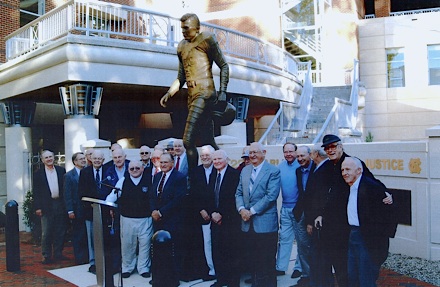 Note from Elizabeth: Five years ago today, Johnpaul Harris’ sculpture of UNC football legend Charlie “Choo Choo” Justice was unveiled at the west entrance to Kenan Stadium. Not only was our volunteer Jack Hilliard there, he was involved (along with Hugh Morton) in the creation of the statue. Jack shares some of his recollections in this post.

The voice on the phone was familiar. “Hello Jack, this is your friend Hugh Morton.” He was answering my request for photographic help with one of my projects. The conversation lasted about 10 minutes but as we began to wrap it up Hugh said: “I’m going to be dong something next Tuesday that you might be interested in. I’m going to take a group of Justice-era players over to Johnpaul Harris’ studio in Asheboro to check out his progress on the Justice statue. Would you like to join us?” It took me about 1/100 of a nanosecond to make up my mind. We were all to meet at the McDonald’s on Highway 64 in Asheboro at 10 on Tuesday morning June 1, 2004. “We’ll caravan over to the studio . . . I can take you there, but couldn’t begin to tell you how to get there,” he said.

When I walked into the restaurant on Tuesday morning it was like a gathering of my boyhood heroes . . . Rizzo, Neikirk, Morton, Pupa, and Cox.  A few moments later Weiner joined the group. Boyhood heroes indeed, but the thing is, I never outgrew that . . . these guys are still my heroes. 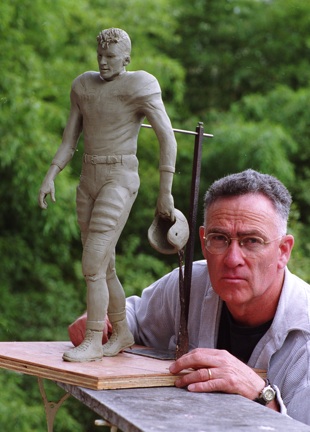 The 10 mile drive to Harris’ studio took about 15 minutes—Highway 64 to 49 and back into rural Randolph County. Johnpaul and Ginger Harris’ home/studio is unique. (It was once described in a magazine article as a cross between “Swiss Family Robinson” and “Sanford and Son”). We were greeted and taken in to view the 8 foot 6 inch clay model. All of the Justice-era players made comments and Harris took lots of notes. Then Morton took out his camera and began taking pictures. When all of the players’ pictures had been taken, he turned to me and said, “OK, Jack, let’s get one of you.” It was like that Walter Cronkite – Ted Baxter scene from the Mary Tyler Moore Show when Cronkite tells Baxter, “you can call me Walter.” I wasn’t dressed properly for a picture, but I wasn’t about to miss the opportunity to have a my very own personal “Photo by Hugh Morton.” When that photo arrived in the mail a couple of days later, it was placed in a very special scrapbook to be treasured forever. 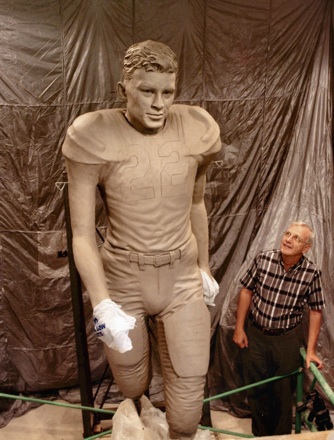 Over the next five months I made several trips back to the studio to watch a master at work, and in the process Johnpaul and Ginger became great friends. In early September a statue dedication date was finalized.
Friday, November 5th, 2004 was a beautiful day in Chapel Hill. The ceremony was scheduled for 3 PM. Hundreds of people gathered at the west end of Kenan Stadium in front of the Kenan Football Center. Present were several dozen of Charlie’s teammates, dignitaries such as UNC Chancellor James Moeser, former UNC System President Dr. William Friday, Hugh Morton (who had headed up the project), Head Football Coach John Bunting, “Voice of the Tar Heels” Woody Durham, and various Tar Heel fans enjoying the warm November afternoon. Over the next hour Master of Ceremonies Dick Baddour would introduce the dignitaries and several teammates. Each would share personal stories of Charlie’s heroics on the football field, his modesty and selflessness, and his storybook marriage to wife Sarah.

As Joe Neikirk, a Justice teammate and originator of the statue idea, made his remarks, he said, “I can’t help but believe that Charlie and Sarah are looking down with pride.” At that very moment the Morehead-Patterson Bell Tower chimed out the quarter-hour. Neikirk raised his hands and looked up into the Carolina blue sky. In describing the incident, UNC’s Lee Pace said “No one present believed there was anything coincidental about it.”

Following the ceremony many of us stayed around, not wanting the magnificent afternoon to end. We took time to view the statue up close and see the detailed workmanship that Harris had been able to accomplish (mainly by using Hugh Morton photographs). We also got to read the informational plaques on the facade behind the statue. (And, if you are standing facing the statue, the plaque on the far right tells the story of the 1950 College All-Star game and Charlie’s MVP performance. I was given the honor by Hugh Morton to prepare the information for that plaque).

Finally as we walked away, several of the Tar Heel faithful said “we’ll see you tomorrow.” On Saturday, November 6th, 2004 UNC would meet Virginia Tech in Kenan Stadium. It would be the first time Tech had played in Kenan since September 28, 1946 . . . the first game of the Charlie Justice Era.
–Jack Hilliard

6 thoughts on “My Personal "Photo By Hugh Morton"”