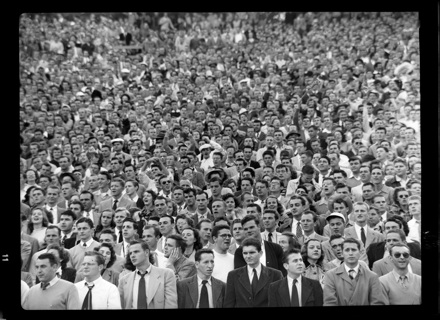 You knew Hugh Morton photographed legendary North Carolinians including Terry Sanford, Michael Jordan, Billy Graham, Andy Griffith, and Charles Kuralt; Azalea Queens and musicians of all stripes; and prominent national figures from John F. Kennedy to Al Gore. You definitely knew that he photographed Luther H. Hodges (NC Governor 1954-1961, and likely Morton’s most-photographed person, except for perhaps his family).
But, did you also know that Morton photographed both the Prince of Wales and Queen Elizabeth II? What about Ed Sullivan, or Rich Little? Jesse Jackson, Coretta Scott King, and Shirley Chisholm? And how about Newt Gingrich with a black bear? (A die-hard Democrat himself, Morton did in fact take pictures of some Republicans — Gingrich, Reagan, Nixon, and Helms, to name a few). Did you know he took striking portraits of rural people living in the NC mountains during the 1940s-1950s? And shot at least four different Cherokee Chiefs?
This is just a tiny morsel of the feast of riches that await you in Series 2 of the Morton Collection, now included in the online finding aid and available for in-person exploration. This is the largest series (oh, how I hope) and definitely the most difficult to process — take note that subseries 2.6, “People, Identified,” contains more than 700 different named individuals!
Take a look, and — as always — give us your feedback on what/how we’re doing.