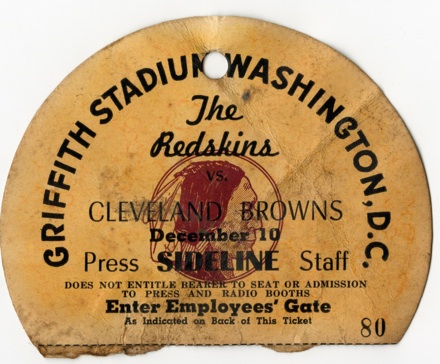 The Sunday afternoon weather forecast for Washington, DC and northern Virginia was for cold temperatures with sleet and snow. But that didn’t keep several thousand North Carolinians and Hugh Morton away from the Washington Redskins-Cleveland Browns football game in Griffith Stadium on December 10, 1950. Most of those Tar Heels were there to see UNC’s great All America Charlie “Choo Choo” Justice work his magic one more time. Morton was also there to see his friends Cleveland Quarterback “Automatic” Otto Graham, Redskins Halfback “Bullet” Bill Dudley, and Amoco Redskins Network announcer Harry “The Whiz” Wismer. 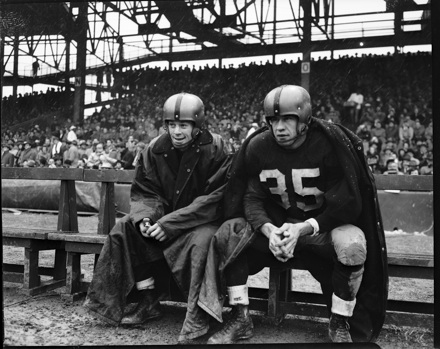 Before the scheduled 2PM kickoff, the snow began falling.

It was the final game of the ’50 season and for Justice it was the completion of his first season of professional football. Cleveland was favored to win (they were 9 and 2 while the Redskins were 3 and 8). A season-high crowd of 32,000 watched the Redskins take the lead in the first quarter when Justice caught a touchdown pass from Sammy Baugh. Both teams alternated in scoring the first six of the game’s nine touchdowns with the Redskins striking first each time. At times the snowfall was so heavy, it was hard to see the players, especially the Browns who were wearing their white uniforms. Luckily, the weather didn’t prevent the halftime show. 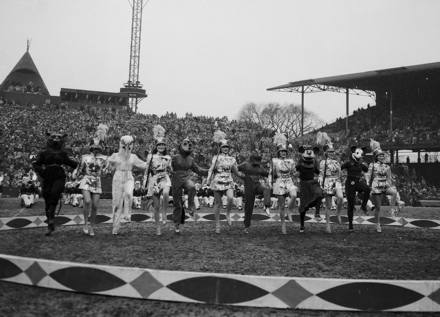 With the the score tied at 14, Washington’s Bill Dudley sprinted through the swirling snow 22 yards to give the Redskins a 21 to 14 lead. But with eleven minutes gone in the third quarter, the Browns took at 28 to 21 lead and never looked back. Otto Graham completed 23 of 32 passes for 321 yards and four touchdowns. New York Times reporter Joseph Sheehan’s lead sentence in the December 11th edition went like this:

“With Otto Graham completing passes almost at will, the Cleveland Browns snowed under the Washington Redskins 45 to 21.”

The near-blizzard like conditions continued as fans headed out of the stadium to their snow-covered cars. Hugh Morton, in a letter to The State magazine publisher Carl Goerch, described what followed as “a traffic jam to end all traffic jams.” 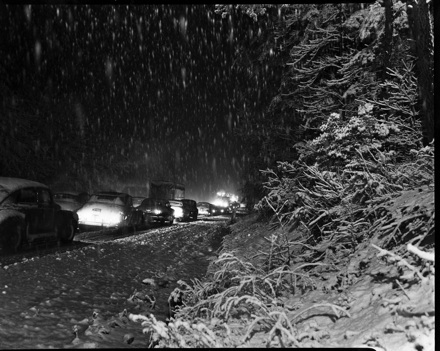 It stretched along highway US-1 just past Quantico for five miles between Washington and Richmond. (Of course there were no interstate highways in those days).  Morton’s description continued: “Trailer trucks were stalled on hills and many of them were side-wise on the road. Batteries were dead, slick tires spun, folks ran out of gas—it was terrible.” Morton was able to get through, but it took him nine and a half hours to cover the one and a half hour trip between DC and Richmond. So while he was stalled in traffic, what did Hugh Morton do? Of course, he took some pictures in order to remember the experience . . . “One I don’t care to become involved in again,” he said.
–Jack Hilliard

3 thoughts on “"Scores, Weather and Traffic, Up Next"”