A few weeks ago I received a friendly call from Mr. Bob Martin, an Avery County resident, author, admirer of Hugh Morton, and former director of the Crossnore School, a private, non-profit home and school in the NC mountains serving (primarily) abused and neglected children. Bob’s call triggered a memory of a set of Morton images that had caught my interest a while back—two circa 1940s portraits of Dr. Eustace H. Sloop, co-founder (with his wife Mary Martin Sloop) of the Crossnore School. 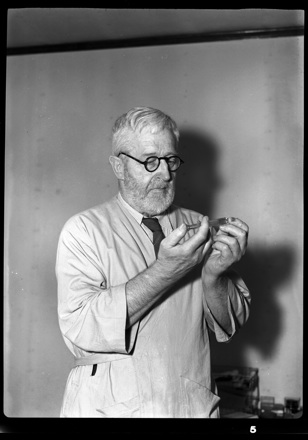 While perhaps not the most aesthetically pleasing example of Morton’s work, I like these Sloop portraits because they show him engaged in his primary calling, medicine. Both Eustace and his wife Mary were trained as doctors, and arrived in Crossnore in 1913 planning to provide much-needed medical assistance in the Appalachian Mountains. Mary soon devoted herself to improving public education as well, founding the live-in school in 1917; it was re-incorporated in 1939 as “a child-caring institution, whose purpose shall be to provide a home and industrial and vocational training for orphan, half-orphan, and deserted children . . . preference being given to mountain children” (from p. 8 of Philis Alvic’s 1998 history, The Weaving Room of Crossnore School).

You can learn about Mary T. Martin Sloop’s remarkable life through her 1953 memoir Miracle in the Hills: The lively personal story of a woman doctor’s forty-year crusade in the mountains of North Carolina, written with LeGette Blythe. As Blythe described Sloop, “no mold shaped her, no die stamped her out. . . . She is one of our last examples of the sturdy, energetic pioneer women who played such an important role in the settling of America.”

I wish I had more illustrative material for this post, e.g. a portrait of Mary Sloop — but Morton doesn’t seem to have taken any. Bayard Wootten, however, did; she took this shot of the Sloops performing surgery in the field, circa 1917. (It was included in a 2005 exhibit put on by the North Carolina Collection Gallery entitled “Sour Stomachs, Galloping Headaches,” along with a few other early images from the Crossnore School, including Wootten’s photograph of outdoor surgery.) 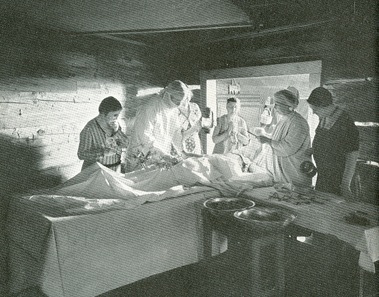 Today, the Crossnore School is a private, non-profit children’s live-in facility and home of Crossnore Academy charter school that, in the words of Bob Martin, “provides hope and healing in a homelike, residential education setting for children from families in crisis.” (Dr. Phyllis Crain, the school’s director, was the winner of the prestigious 2008 Nancy Susan Reynolds Award for Advocacy). Bob Martin’s daughter, Melynda Martin Pepple, is the Director of Public Relations.
Many thanks to Bob and Melynda for getting in touch and reminding us all of the important work of the Crossnore School, which you can help support!
As for Hugh Morton, Bob wrote the following to me in a letter:

Mr. Morton was the essence of all required to be a Tar Heel in my opinion. I always felt at ease and a special warmness from Hugh when I asked him for a photograph and a copy of his exceptional work to enhance the cover or other portions of our “Miracle Mountain” yearbook at The Crossnore School where I had the pleasure of being Executive Director from 1973-1982. Mr. Morton was a true professional in an ethical field of endeavor and many other areas and I am grateful for the relationship that we shared.

One thought on “An ongoing "miracle in the hills"”