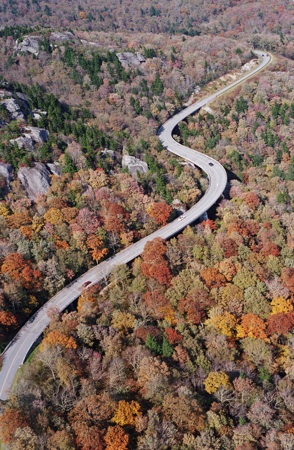 In case you haven’t heard (perhaps you’ve been hibernating), 2010 marks the 75th anniversary of the Blue Ridge Parkway. Numerous events throughout the year will help mark this occasion, including a symposium next week at Appalachian State University, at which UNC Libraries’ Natasha Smith, Elise Moore, and faculty advisor Anne Mitchell Whisnant will unveil the exciting Driving Through Time digital project! (More on that after it’s launched).
Luckily, we were able to steal Dr. Whisnant (author of the 2006 book Super-Scenic Motorway: A Blue Ridge Parkway History) away long enough to write an essay for our Worth 1,000 Words project. It’s now available, and is entitled Roads Taken and Not Taken: Images and the Story of the Blue Ridge Parkway ‘Missing Link.’
It’s no secret that determining the route for the last leg of the Parkway was a protracted, complicated, and divisive process, but one that ultimately resulted in the much-celebrated (and photographed) Linn Cove Viaduct (shown from the air at left). In her essay, Whisnant uses some of Morton’s own images to shed new light on this conflict. She also provides a crucial backdrop for some of Morton’s later environmental work, which will be examined in future Worth 1,000 Words essays.
We look forward to receiving your thoughts and comments!