Three cheers for this year’s NC Sports Hall of Fame inductees, and for another blog post by JACK HILLARD! I should note that although (as Jack says below) Mr. Morton probably did attend most of the induction ceremonies, the Morton collection seems only to contain images of ceremonies from 1971 and later (see the collection finding aid, sub-series 2.8, under “Other Events.”) Wish we knew what happened to those earlier ones… 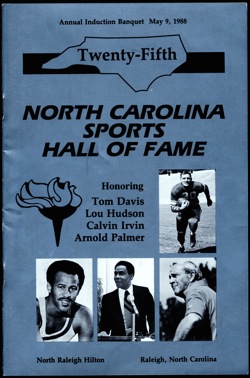 It was early spring 1988 when Bob Wills, Executive Director of the North Carolina Sports Hall of Fame, called and asked if I would once again help with the inductee profile videos. I was pleased to do so for a third year. As payment, Wills sent me two tickets to the 25th Hall of Fame induction banquet, held at the North Raleigh Hilton. He explained that since we were not officially representing a media outlet and since we weren’t invited guests of any of the inductees, we would be seated wherever there was a table with vacant seats. Much to my surprise, Marla and I were seated at a table with Hugh and Julia Morton. I remember vividly Julia describing that first Hall of Fame induction ceremony in Charlotte in April of 1963. She remembered how excited the crowd of about 500 was to see Jim Beatty run again the first sub four minute mile indoors . . . a replay of ABC’s “Wide World of Sports” shown on the big screen at the Queen Charlotte Hotel. Jim McKay‘s call of the race has become a classic.

Hugh Morton’s association with the Hall goes back to its beginnings in 1962.  He was on the first board of directors, was Hall president in 1976, and he attended most of the induction ceremonies over the years. In the early days the induction ceremonies were held in cities across North Carolina. Usually a city was selected based on the fact that an inductee was from that area: Wilmington in 1971 for Sonny Jurgensen and Roman Gabriel; Greensboro in 1974 for Art Weiner; Durham in 1976 for Dr. Leroy Walker; Asheboro in 1977 for Lee Stone. 1970 inductee Bones McKinney jokingly would say that he carried the museum around in the truck of his car for many of those early years.

Whatever city was selected, Hugh Morton went, and his camera went also. His photographs of 1981 inductee Dean Smith (see below) and 1987 inductee Francis Rogallo have been widely published. 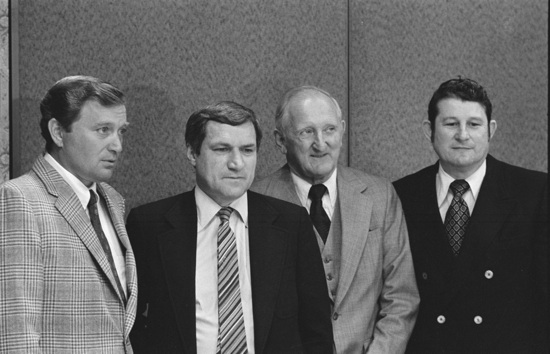 In a 2003 interview, Hugh described that first board of directors meeting in February of ’63. The meeting lasted four hours and the 18 board members had to cut the list of 10 candidates to 5. “We took in five people that (first) year,” said Morton. “On the first ballot, Charlie (Justice) got more votes that all the others put together. We all knew how good he was.”

So Charlie Justice became the first member of the North Carolina Sports Hall of Fame. I recall in 1980 when longtime Sports Editor of the Greensboro Daily News, Smith Barrier, was inducted, WFMY-TV sports reporter Johnny Phelps interviewed Barrier and asked him to list his favorite sports moments. Said Barrier, “I’d have to put Frank McGuire and the 1957 national champion Tar Heels near the top. And of course David Thompson leading NC State to a NCAA Championship in the Greensboro Coliseum in 1974 . . . and Billy Joe Patton at the Masters in 1954.”  At that point Barrier paused for several seconds. Then he added, “and every time Charlie Justice handled the ball for Carolina was a genuine thrill.” 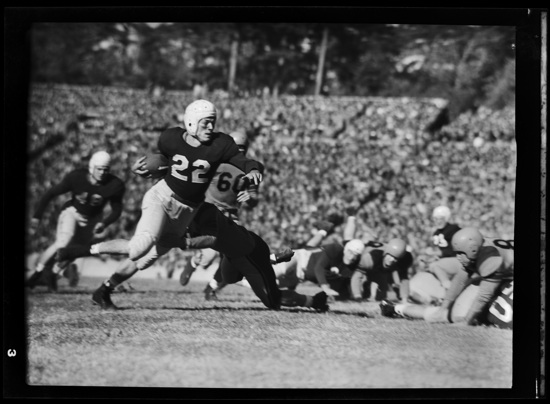 As Hugh said, “we all knew how good he was.”

“The purpose of the North Carolina Sports Hall of Fame is to honor those persons who by excellence of their activities in or connected with the world of sports have brought recognition and esteem to themselves and to the State of North Carolina.”

Next Thursday night, May 13, at the North Raleigh Hilton, seven new North Carolina sports legends will join the other 260 at the 47th North Carolina Sports Hall of Fame induction banquet.  In the Class of 2010 will be a Hugh Morton favorite photo subject, Don McCauley, often photographed by Morton with longtime friend Charlie Justice. 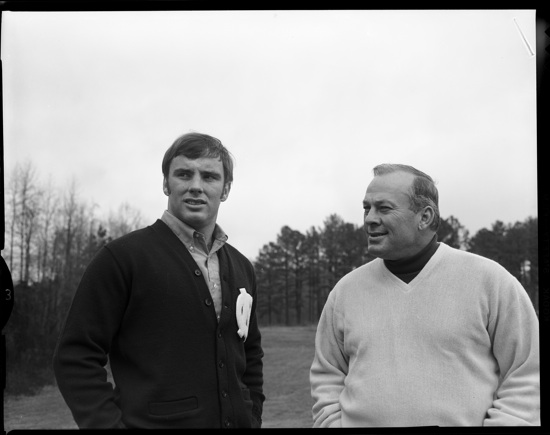 3 thoughts on “"Recognition and Esteem"”