Note from Elizabeth: We hope you enjoy another post from JACK HILLIARD, in honor of Sunday’s 68th anniversary of the commissioning of the U.S. Navy Pre-Flight School at UNC-Chapel Hill on May 23, 1942. (For more information on this topic, see Janis Holder’s Worth 1,000 Words essay).

December 7, 1941: many readers across central North Carolina turned directly to the sports pages when their Sunday edition of the Greensboro Daily News arrived on that cold morning. The lead story was the annual high school all-state football team, and leading the team was a 17-year-old junior from Asheville’s Lee Edwards High named Charlie Justice. High school football was huge in North Carolina, but professional football wasn’t, yet. Even so, on the back page of the sports section was a mention of the Washington Redskins playing the Philadelphia Eagles in the final game of the NFL season, and Redskins owner George Preston Marshall would once again stage a spectacular halftime Christmas show.

This Christmas game always filled old Griffith Stadium with families, politicians, and military personnel from the District and northern Virginia. Seated high up in the press box were Washington Post sports columnist Shirley Povich and Associated Press reporter Pat O’Brien. Shortly before the 2 PM kickoff, O’Brien received a puzzling-three-word telegram from his editor downtown — it said, simply, “Keep It Short.” About that same time, the public address announcer began a series of announcements: “Admiral W.H.P. Bland is asked to report to his office at once.” “Captain R.X. Fenn of the United States Army is asked to report to his office.” The announcements continued . . . Joseph Umglumph of the FBI,  Joaquim Eilzalde, resident commissioner of the Philippines . . . Secretary Stimson and Secretary Knox call the White House. A second telegram arrived at O’Brien’s desk. This one solved the puzzle: “The Japanese have kicked off. War Now!” At 2:26 PM, the Mutual Broadcasting System interrupted the radio broadcast of the game with a bulletin telling of a Pearl Harbor attack. The world would never be the same.

Back in Chapel Hill, UNC Sophomore Hugh Morton, who had recently won the “Carolina Intercampus Council” award, stood ready to document a campus preparing for war (however, his formal education would be interrupted a year later when he joined the Army).

Even before the Pearl Harbor attack, UNC President Frank Porter Graham had offered the University’s help in the event of war. In 1940 Graham said the University would offer “all its resources to the nation for the defense of the freedom and democracy it was founded to serve.” 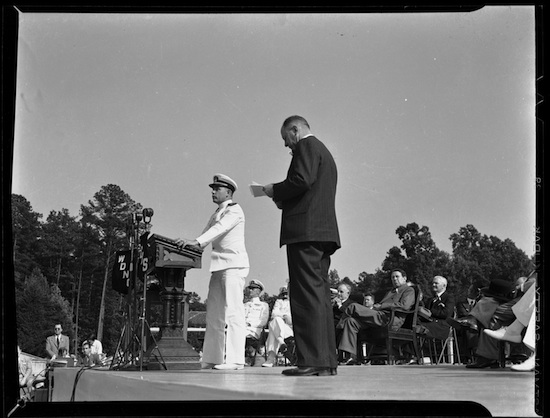 Graham’s first priority was to lobby for a Navy Pre-Flight Training School on the Chapel Hill campus. It would be one of four such schools nationwide that prepared future pilots for aerial combat. With the help of alumnus, newspaper editor, and former Secretary of the Navy Josephus Daniels, UNC became one of the four. The Navy announcement came in February, 1942 and on May 23, 1942 the official commissioning was held in Kenan Stadium with Daniels delivering the keynote address — 68 years ago this Sunday. 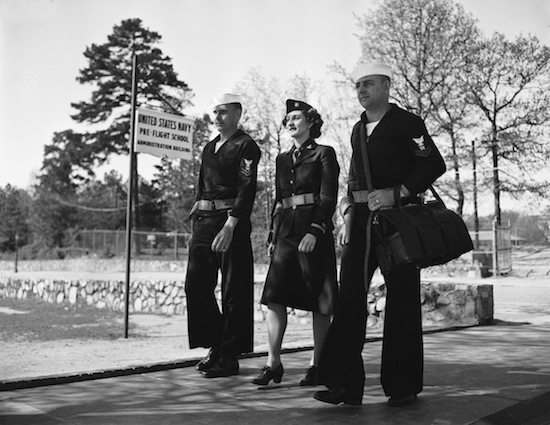 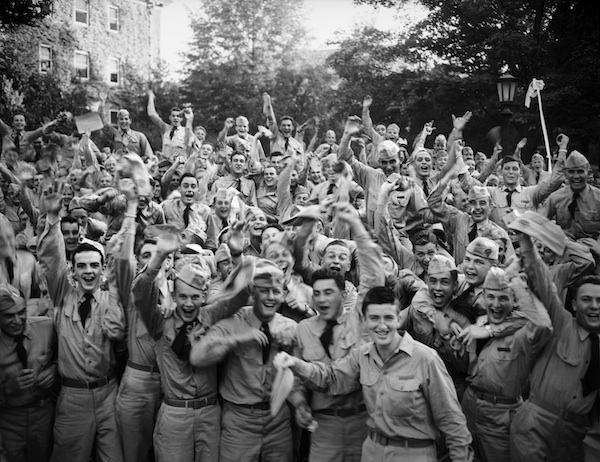 On May 28th, the first group of 242 cadets arrived on campus. Every two weeks, 300 more would arrive until a quota of 1,875 was reached. The cadets ranged in age from 18 to 27 and each cadet received $75 per month. The training day was from 5:30 AM until 6:15 PM 6 days a week, and consisted of two hours of strenuous physical activity, two hours of classroom work in Caldwell Hall, and athletic training in swimming, basketball, football and boxing. There was some free time, and entertainers like Ronald Reagan, the Jimmy Dorsey Orchestra with Helen O’Connell, and Kate Smith came to the campus to entertain.

The athletic talent at the Pre-Flight School was outstanding. The baseball team featured the legendary Ted Williams, and defeated Babe Ruth’s New York Yankees in July 1943. Kenan Stadium became home to the Pre-Flight Cloudbusters football team. In April 1942, there was a young Ensign physical fitness instructor named Gerald R. Ford. Thirty two years later he would become the 38th President of the United States. Another future President came through the program as well. His name: George H.W Bush. 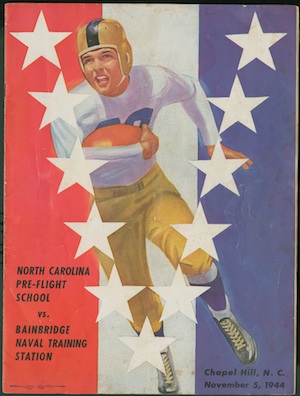 On November 5, 1944 The Cloudbusters hosted The Commodores from Bainbridge (Maryland) Naval Training Station. Coaching on the sideline that day for the Cloudbusters was a young Lieutenant named Paul W. Bryant. He would lead the University of Alabama to six national titles during the 1960s and 1970s, and would be known as “Bear” Bryant. Leading the Cloudbusters at quarterback was Otto Graham who would lead the Cleveland Browns to 7 pro championships in the 1940s and 1950s, and leading the Commodores was a 20-year-old from Asheville, NC. Two years later he would return to Kenan and during the years 1946 to 1949 would rewrite the UNC record books. His name: Charlie Justice.

When the War ended, the campus returned to normal. The US Navy Pre-Flight School at Chapel Hill was decommissioned on October 15, 1945. Some of those Pre-Flight buildings still stand and remind passersby that the University of North Carolina at Chapel Hill adapted to serve the country during its “most critical crisis.”
–Jack Hilliard

2 thoughts on “An infamous day…campus prepares for war”