NOTE FROM ELIZABETH: This past Monday, Morton images of the New York Yankees’ 1979 visit to Chapel Hill just happened to come up in our scanning queue. As I added images of George Steinbrenner to the digital collection, I chuckled to myself about those silly Seinfeld plotlines featuring The Boss. So, I was very surprised and saddened to learn of Steinbrenner’s death the very next morning. I asked our resident sports expert Jack Hilliard to write this tribute post.

It was the secon 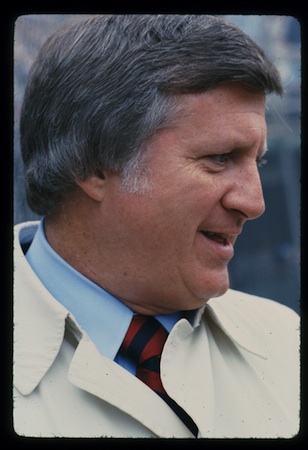 d Tuesday in July — the day of the “Midsummer Classic,” the 81st Major League Baseball All-Star Game. A time when baseball celebrates the best players in the game . . . but the sad news from Tampa, Florida on the morning of July 13, 2010 was that a giant of the baseball world had died. George M. Steinbrenner III, owner of the New York Yankees, died at 6:30 AM of a massive heart attack, nine days after his 80th birthday, and 14 hours before the first pitch of the All-Star Game in Anaheim, California.
He was loved my many, hated by a few, but ignored by none. Steinbrenner once told a reporter for USA Today: “I’ll never have a heart attack. I give ’em.”
In the thirty-seven and a half years Steinbrenner was “The Boss,” the Yankees won 7 World Series Championships, 11 American League Pennants, and 16 American League East Titles. Over the years, his practice of firing and hiring, re-firing and re-hiring made him famous, or perhaps I should say infamous. In his first 23 seasons,  he changed managers 20 times (including dismissing Billy Martin on FIVE separate occasions!). In 2006, he turned the day-to-day operation of the Yankees over to his sons, Hank and Hal. On April 13, 2010, Yankee stars Derek Jeter and Joe Girardi privately presented him the first 2009 World Series Championship ring. He was “almost speechless” . . . almost.
George Steinbrenner was no stranger to Chapel Hill and UNC. His daughter Jennifer is a 1981 graduate of Carolina, and on three occasions between 1977 and 1981, he brought his Yankees to play the Tar Heels in Boshamer Stadium. 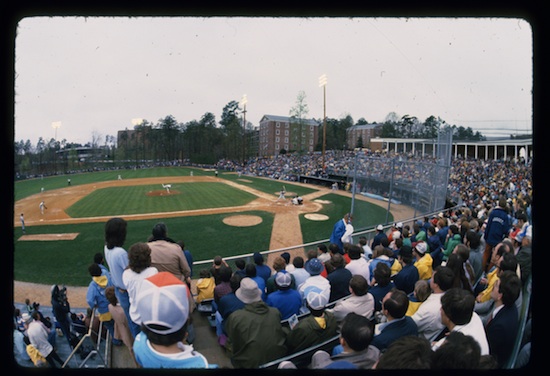 The game on April 3, 1979, is the game many remember as “A Great Day in Mudville.” On that day 7,000 Tar Heel partisans jammed into Boshamer, filling the 2000 seats and the grass-covered embankment along the first base line, lining the fence around the stadium four and five deep, and filling the balconies of the surrounding dorm. Due to rain, the start of the game was delayed and the end came early. And there, in the middle of it all, was Hugh Morton, cameras in hand. 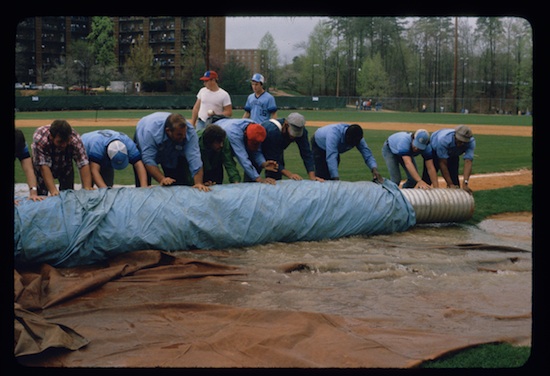 Morton documented the action on the field and also visited with his friend Clyde King, Yankee pitching coach and scout. (King was a North Carolinian from Goldsboro, and during the 1982 season became Steinbrenner’s third general manager, going 29 and 33 over the last 62 games of the season. Some of the players thought he was a spy for “The Boss.”)
Tar Heel native Jim “Catfish” Hunter was the hit of the party.  A good time was had by all . . . well, almost. Steinbrenner’s Yanks won the game 9 to 4.
The next time you visit the new and improved, rebuilt Boshamer, notice the entrance courtyard. It is named for the Steinbrenner family — the result of a one million dollar donation by George Michael Steinbrenner III.
When future baseball historians write about the events of July 13, 2010, the 81st Major League Baseball All-Star game will not be the lead story. The loss of “The Boss” will.