Note from Elizabeth: UNC football coaching legends Carl Snavely and Jim Tatum both passed away in the month of July —  Snavely on July 12, 1975, and Tatum on July 23, 1959 (51 years ago today, at only 46 years old). JACK HILLIARD provides a two-part tribute to the two Hall-of-Famers: first up is Snavely, a.k.a. the “Grey Fox.” Keep an eye out for part 2 on “Sunny Jim,” coming soon.

A cold winter rain was falling on the UNC campus when Head Football Coach Carl Snavely arrived at his 311 Woollen Gym office on February 14th, 1946. Spring football practice was underway and Snavely was thinking about a scrimmage game with Coach Doc Newton’s Guilford College Quakers that was scheduled for February 27th in Kenan Stadium. The ring of his phone broke Snavely’s concentration. It was UNC’s Director of Admissions Roy Armstong. “Carl, I thought you’d like to know that a freshman named Charles Justice has just enrolled in the University.” Before the soft-spoken Snavely could react, Armstrong began extolling Justice’s football virtues – how he had been recruited by more than two hundred schools, as well as by George Halas and the Chicago Bears of the NFL . . . how he had been an all-state performer at A 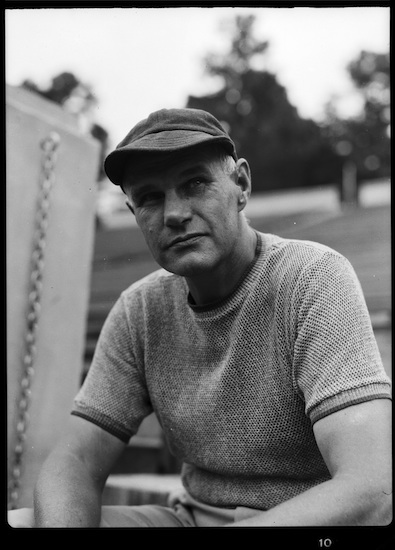 sheville’s Lee Edwards High . . . and how he had been the star of the Bainbridge Naval Training Station team during the War.
Finally, Snavely was able to get in a word. “Thank you very much, I hope Charles comes out for the team.” Suddenly that cold rainy Thursday had turned into the best Valentine’s Day Carl Snavely ever had. (And as for that scrimmage game with Guilford, Justice carried the ball one time that day – a 66-yard touchdown run to the delight of about a thousand students who had come to watch the practice).
Carl Grey Snavely, affectionately known as “The Grey Fox,” or “King Carl,” or “The Dutchman,” first came to UNC in 1934 and was head football coach for 2 seasons. Two great teams and two great players emerged from that period: George Barclay became UNC’s first All America player and Jim Tatum became an All-Southern tackle. Snavely left Carolina following the ’35 season to become head coach at Cornell; Tatum followed him to Cornell and became his assistant. It was while at Cornell that “The Dutchman” gained national prominence and during a famous game exemplified his shining ethics.
On November 16, 1940, Cornell played rival Dartmouth. Cornell had won 18 straight games, but Dartmouth was able to hold on to a 0-0 tie going into the 4th quarter. Then Dartmouth scored a field goal and led 3-0. With less than a minute to go, Cornell got the ball to Dartmouth’s six-yard line. Three runs and a pass failed to score . . . then, as confusion reigned on the field with what looked like a tremendous upset, the unheard-of happened. Linesman Joe McKenny signaled the ball should remain with Cornell for another down. Referee Red Friesell agreed. Cornell was given a fifth down. They scored. Game over, Cornell wins 7-3. When Carl Snavely reviewed the game film and realized what had happened, he sent a telegram to Dartmouth Head Coach Earl “Red” Blaik. “Cornell relinquishes claim to victory and extends congratulations to Dartmouth.” Dartmouth accepted the forfeit; final score 3-0, Dartmouth. (Snavely pioneered in the use of film for coaching and scouting, and is remembered in Chapel Hill for his late-night screening parties with vanilla ice cream). 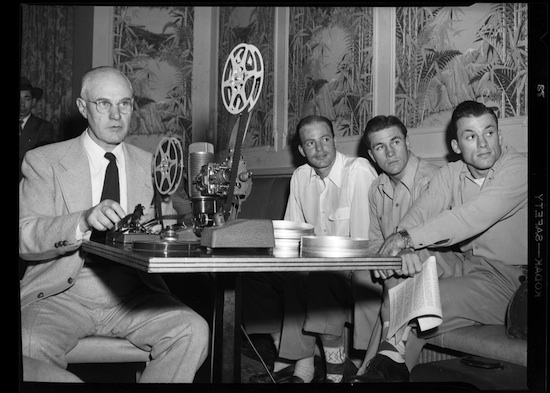 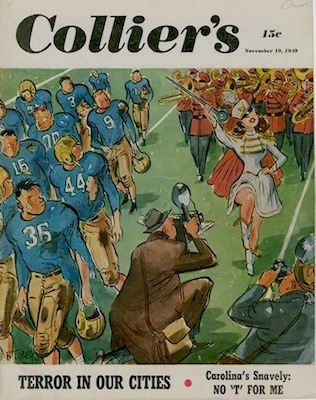 Following the 1944 season, Snavely returned to Chapel Hill and was able to take the Tar Heels to the top with the help of several returning military veterans. In fact, when the college football rankings came out on October 11, 1948, UNC was number one in the country. During the years 1946-1949, the Snavely single-wing machine won 32 games and played in three major bowls. In the fall of ’49, Collier’s magazine called and wanted to do a Snavely feature story. Of course, they also called Hugh Morton for supporting pictures. The result, in the November 19th issue of the magazine, was a four-and-a-half page story with four Morton color pictures.
(Note: the Morton images that appeared in the Collier’s story are not in the Hugh Morton collection, but some very similar color images of Coach Snavely and the team are).
In 1950, with many of the big names gone, the Tar Heels returned to average, and after 3 straight losses to Duke by the end of the ’52 season, the UNC Athletic Council was ready for a change. Snavely submitted his resignation on December 2, 1952. When he left UNC in early 1953, he wouldn’t return to the campus until the Justice Era Reunion in the fall of 1971.
Snavely’s final coaching stop was at Washington University in St. Louis where he coached from 1953 to 1958. He was inducted into the National Football Foundation’s College Football Hall of Fame in 1965.
Carl Snavely died at his home in suburban St. Louis on July 12, 1975. He was 81 years old.
–Jack Hilliard

2 thoughts on “The Grey Fox and Sunny Jim, part 1”