Note from Stephen: Today’s post from JACK HILLIARD is presented in honor of NASA shuttle Discovery’s last mission scheduled for lift-off today, but postponed until Wednesday.

It is a cloudy, warm January afternoon on a sandy cape area east of Walt Disney World in Central Florida. It is a place where the Banana River winds its way through thick marshes. . . where you may see herons and pelicans . . . manatee and alligators . . . eagles and egrets. As you lift your eyes toward the horizon, in the distance stands the mighty Saturn V (pronounced “five”) Rocket . . . all 363 feet of it fueled and ready to fly. You are at NASA’s Complex 39 Press Site at the Kennedy Space Center. Within the next six hours, Apollo 14 will begin America’s fourth trip to land a man on the lunar surface. The Mission Commander is Astronaut Alan Shepard. He was America’s first man in space about ten years earlier. The Command Module is called “Kitty Hawk” and is piloted by Stuart Roosa. The Lunar Module is called “Antaries” and is piloted by Ed Mitchell. All three men have spent time in the simulator at the Morehead Planetarium on the UNC campus.

As I stand there on the bank of the Banana River, I remember the handwritten sign on the planetarium door that said “No Class Today.” That was March 2, 1960 and students in Harvey Daniell’s Astronomy 31 Lab did not meet in the Morehead Planetarium that afternoon. The reason, America’s Mercury Astronauts were taking classes in celestial navigation in the planetarium simulator. I didn’t know it at the time, but one of the astronauts in the Planetarium that day was Commander Shepard.

Launch Complex 39, the nation’s first operational spaceport, ranks as one of history’s great engineering achievements. Three and a half miles from Pad A at the press site, several hundred media personnel have gathered including Hugh Morton. (I was not aware that he was there at the time). As always, he not only documented the Apollo launch, but went to an adjoining location, where several special NASA guests were gathered at the VIP site.

Among those guests on this day . . . Vice President Spiro Agnew [left center in photograph below], the future King of Spain, Juan Carlos [far right] and his wife Princess Sophia . . . Henry Kissinger, US security advisor to President Richard Nixon . . . America’s first man on the moon Neil Armstrong [right center], and Hugh O’Brian, movie and TV star. (Editor’s note: NASA bestowed Hugh O’Brian its “Freedom Through Knowledge” Award in 1971.  And is that Caspar Weinberger in the upper left?—Stephen) 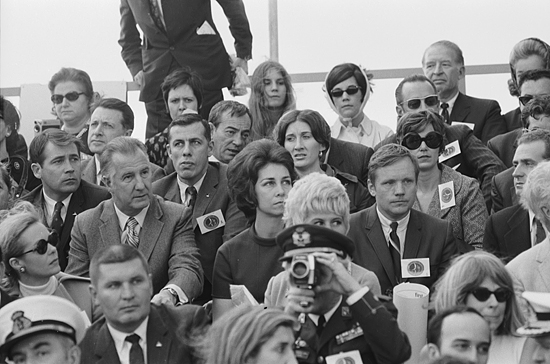 As the countdown proceeds toward the scheduled launch time of 3:23 PM, a bank of clouds moves over the space center. Then, a brief shower. The countdown is at T-8 minutes and holding. We wait 40 minutes for the clouds and rain to move out of the area. Then at 3:54, comes the familiar voice of NASA’s Jack King: “This is Apollo launch control, we will resume the count at 3:55 PM.” A cheer goes up from the assembled media.

Nothing can prepare you for the sights and sounds of a Saturn V launch. Films and television are simply inadequate to convey the awe and power of the experience. 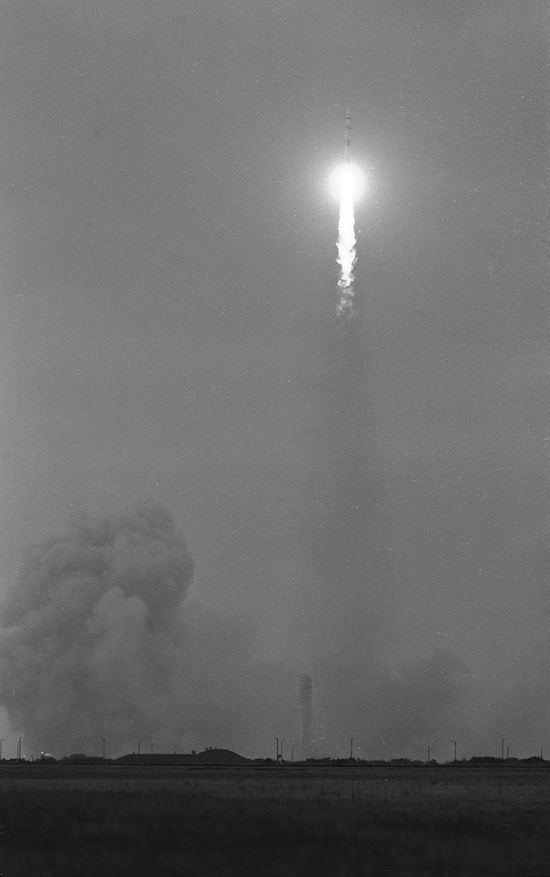 The countdown proceeds smoothly during the next eight minutes. Then at 4:03 PM on January 31, 1971, the fire and smoke of the Saturn V’s first stage becomes visible. Another cheer from all the viewing areas, even before the staccato roar of the engines is heard. (That’s a neat, unique thing about seeing a Saturn V launch in person. You see the cascade of smoke and flame long before you hear the sound of the engines, which takes longer to travel the three and a half miles. We’re use to seeing a launch on TV where the microphones are located on the launch pad and the sight and sound are together.) Finally, the Apollo 14/Saturn V rocket lifts off and is on its way to the moon.

As I stand watching this awesome site of Commander Shepard and his crew flying to the lunar surface, it of course never crosses my mind that 18 years later on June 16, 1989, I would have the honor of meeting Alan Shepard when he and four of his fellow Mercury astronauts gather at the Morehead Planetarium to celebrate several anniversaries . . . the 30th anniversary of the U. S. space program, the 40th anniversary of the Morehaed Planetarium, and the 20th anniversary of the first moon landing. When I finally get a chance to shake his hand, I tell him that I was at the Apollo 14 launch.  He says, “that was a great day . . . I’m glad you were there.”