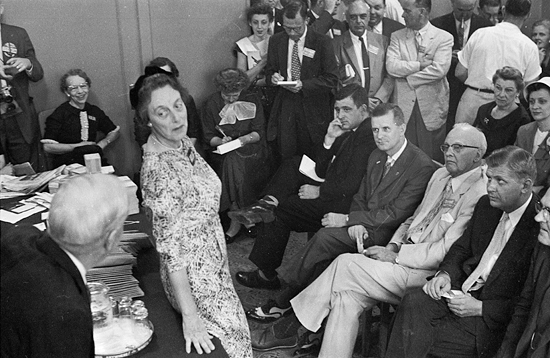 This is the second post on the story behind John F. Kennedy’s campaign visit to the Tar Heel State in September 1960, drawn from newspaper accounts and the book Triumph of Good Will, John Drescher’s account of the gubernatorial contest between Terry Sanford and I. Beverly Lake that preceded Kennedy’s visit. There’s an interesting story that photographs by Hugh Morton and other photographers in the North Carolina Collection Photographic Archives can help tell. In light of the silver anniversary of that momentous campaign, and during the anniversary month of Kennedy’s assassination, I’ll be contributing a series of posts touching on that pivotal time in North Carolina and the nation.

John Kennedy immediately sought out Terry Sanford at the Charlotte Chamber of Commerce meeting in mid January 1959. Sanford was one of only a few of the 1956 Democratic National Convention (DNC) delegates in attendance, and Kennedy knew Sanford was a potential delegate for the 1960 DNC in Los Angeles.  In the above photograph, Hugh Morton captured Sanford (lower right corner) and others listening to Elizabeth “Buffie” Ives, Adlai Stevenson’s sister, during the 1956 DNC. Charlotte Observer photographer Don Sturkey (whose collection is part of the North Carolina Collection Photographic Archives) attended the Chamber of Commerce gathering, but Sanford is not depicted in any of the seven surviving negatives—one of which is shown below [cropped by the author]. 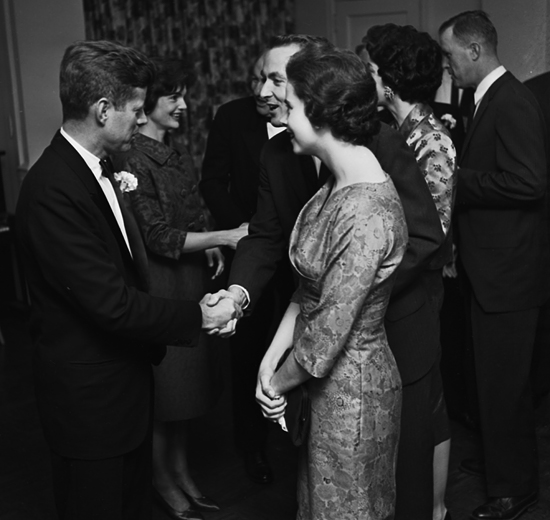 A year and a half later, Sanford was more than just a potential DNC delegate from North Carolina—he was the North Carolina Democratic Party’s candidate in the 1960 race for governor. Sanford had captured the most votes among five candidates during the primary on May 28th, but not enough to avoid a run-off election. On June 25th, Sanford defeated I. Beverly Lake after a month of near-rancorous campaigning. Sanford was now a de facto DNC delegate, and he had to choose between, essentially, Kennedy and Lyndon Baines Johnson for the party’s presidential nominee. North Carolina did not hold presidential primary elections until 1972. Prior to that time, party delegates attending their national convention declared their support for a presidential nominee. Within the state’s Democratic Party the governor and party chairman, both de facto delegates, traditionally selected the remaining delegates—by electoral district and at-large—at the North Carolina Democratic Party Convention, which had been held in Raleigh on May 19th. The party’s candidates for governor and lieutenant governor also became de facto at-large delegates.
Kennedy had impressed Sanford in Charlotte, but now as a gubernatorial candidate his choice had the potential to make or break his upcoming election battle against Republican Robert Gavin—even in a historical one-party (Democratic) state. Sanford’s campaign manager told him, “History is knocking in this opportunity to associate with Kennedy,” while another aide cautioned, “You can’t be for Kennedy. It will kill you.”