Rameses XVIII made his first 2010 Kenan Stadium appearance for homecoming on October 30. He had missed the earlier games due to the untimely death of his caretaker Rob Hogan. Hogan suffered a fall at his farm just outside of Carrboro on September 15 and was hospitalized the following day. He developed a condition in which damaged muscle tissue dies and releases toxins to the kidneys. Rob Hogan passed away on October 8, 2010. He was 54 years old.
“Rob Hogan, the love of my life and my guiding star, passed away this morning at 7:40,” his wife Ann Leonard wrote on a CaringBridge.com page. “May he be at peace. We will miss him.”
Today’s post from Morton volunteer Jack Hilliard is dedicated to the memory of Rob Hogan and takes a look at the history of the beloved Tar Heel mascot as well as a later Tar Heel tradition . . . the Duke–Carolina Victory Bell, which UNC retained after its victory over Duke two weekends ago.

The caravan traveling North on November 10, 1949 consisted of cars and trucks, trailers and trains, buses and a plane or two.  Headed to New York City for a meeting with the Fighting Irish of Notre Dame in Yankee Stadium were, fans and players, coaches and managers, cheerleaders, majorettes and a marching band. And oh yes, Rameses VI and the Victory Bell were there too as was photographer Hugh Morton. 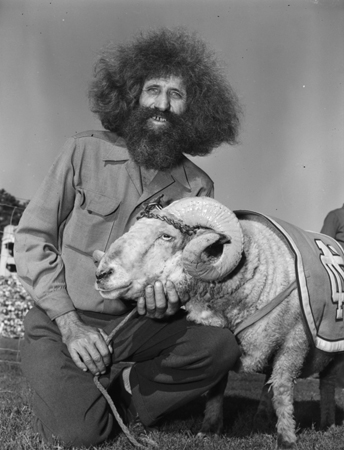 On that day in ’49 the UNC mascot idea for a ram was 25 years old. Morton’s photograph above of Rameses with handler G. B. “Bushy” Cook is undated, but it’s likely from that same era.
In 1924, UNC’s Head Cheerleader Leonard Victor “Vic” Huggins decided that the Tar Heels needed a mascot. After all,  Georgia had a bulldog, and NC State had a wolf. As Huggins explained in a 1962 interview, “I remembered the 1922 football team and its powerful fullback Jack Merritt. They called him the ‘battering ram.’  What about a ram for a mascot?”
So Huggins approached Athletic Director Charlie Wollen with his idea. “How much will it cost?” asked Wollen, who was known for being frugal with athletic funds. When Huggins told him the cost would be $25, Wollen smiled and took $25 from his personal wallet and handed it to Huggins saying “go get us a real he-man ram.”
Rameses I arrived from Texas in time for the pep rally on Friday, November 7, 1924 . . . the night before the big game with Virginia Military Institute (VMI).
On Saturday afternoon, November 8th, a homecoming crowd of 5,000 jammed Emerson Field for the big game. Rameses ran onto the field with the players to the delight of the Tar Heel faithful. The Horned Dorset sheep spurred the team to its finest effort of the 1924 season, holding the game scoreless late into the fourth quarter. With the ball at the VMI 30 yard line, UNC Head Coach Bob Fetzer called on kicker Bunn Hackney to attempt a field goal. But before Hackney ran onto the field, he stopped and rubbed the wooly head of Rameses. Seconds later, Hackney’s drop kick sailed through the goal post and Carolina won the game 3 to 0. (When was the last time you saw Carolina attempt a drop kick?  Maybe never.)
The right tackle on the Tar Heel squad was Henry Hogan and in 1924 he began a family tradition of caring for Rameses . . . a tradition that continues to this day. 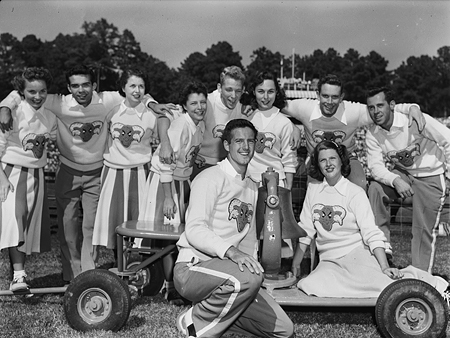 Twenty-four seasons after UNC Head Cheerleader Vic Huggins introduced Rameses to Tar Heel fans, another head cheerleader had another great idea. In the late fall of 1948, Head Cheerleader Norman Sper thought there should be some kind of traveling trophy for the winner of the annual Carolina–Duke football game.  After all, Minnesota–Michigan had “the little brown jug,” and Indiana–Purdue had “the old oaken bucket.”  So Sper, along with Duke Cheerleader Loring Jones came up with the idea for “the victory bell.” Jones designed the model frame and Sper got an old railroad bell from the Southern Railway.
Following Carolina’s victory over Duke in Kenan Stadium in 1948, the Tar Heels were awarded the bell first. Hugh Morton’s undated negative (scanned and shown above) depicts the victory bell and UNC cheerleaders—with Sper front and center.  The photograph appeared in The Carolina Gridiron, the title of UNC’s then game-day football program, on October 15, 1949 so Morton likely made the shot during one of the two previous home games.
Whenever Carolina has been in possession of the bell, the cheerleaders wheel it out ringing it just before the team comes onto the field.  It is then displayed in front of the student section. Over the 62-year history of the Victory Bell, UNC has captured the bell 41 times to Duke’s 20. (There was a tie in 1975.) Duke’s first possession came following their win in 1950. It is the tradition for the winner to paint the platform of the trophy to match their school colors, and in recent years a spray-paint job has been performed on the field.
UNC football historian Lee Pace tells an interesting story following Carolina’s 20-14 overtime win in Kenan Stadium in 2007 game. The Kenan Stadium maintenance crew was making its clean-up round when they discovered near the Duke bench a paper bag filled with more than a dozen cans of royal blue spray paint. Obviously a plan had been made to make a quick color change following a Duke win.
Said Pace, “in the end, no one from Duke had the heart or energy to lug the bag back to Durham, so Butch Williams of the UNC staff stowed the paint in the maintenance shed on the off-hand chance anyone in Chapel Hill needs royal blue spray paint in the coming millennium.”
Whether it be a pre game ceremony on the turf at Kenan, rambling down 42nd Street in the Big Apple for a special pep rally, or on the sideline at the “House that Ruth Built,” Rameses and the Victory Bell will always be fan favorites for Tar Heel alumni and friends everywhere.

8 thoughts on “A Rambling Ram and A Traveling Trophy”