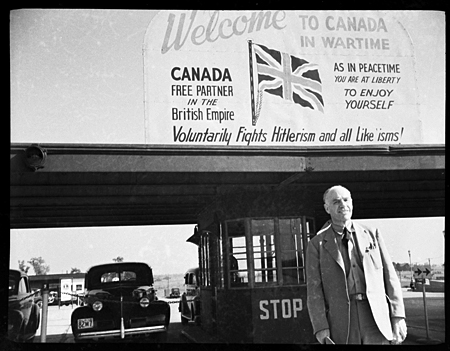 Today is National Flag Day for our neighbors to the north (no, not Virginia). On 15 February 1965, Canada unfurled its new Maple Leaf flag, replacing the unofficially official Canadian Red Ensign. Sometime during wartime in the 1940s, Hugh Morton made his way to the Canada–United States border and (surprise!) stopped to make a photograph or two. In the picture above, an unidentified fellow stands in front of the border crossing. Above the building is a distinctive “Welcome to Canada in Wartime” sign displaying the British Empire’s Royal Union Flag (also known as the Union Jack), which was Canada’s official flag until 1946.  The Royal Union Flag served as the canton (upper left corner) of all the variations of Canada’s Red Ensign flags.
The license plate on the car to the left is unfortunately out of focus just enough to prevent reading any details that might yield what year Morton made the photograph, but it likely predates 1946.

5 thoughts on “Flag Day in Canada”