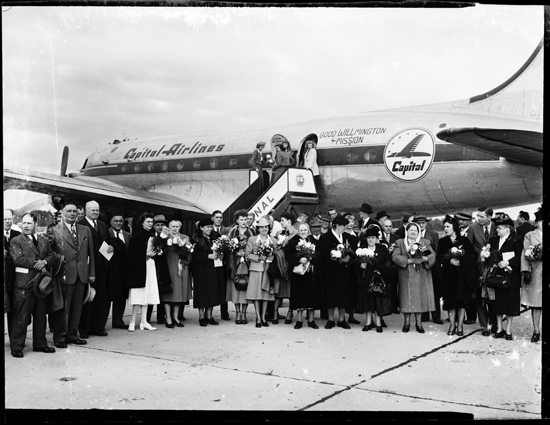 Tucked inside a horseshoe curve of the Monongahela River twenty miles south of Pittsburgh, Pennsylvania lies the once industrial powerhouse town of Donora.  The 2010 United States Census counted 4,781 residents in Donora; in 1948, however, approximately 14,000 people called Donora home—except for one week in late November when a national tragedy sent 40 of its citizens to Wilmington and Wrightsville Beach in North Carolina.
Donora’s industrial roots took hold in the early 1900s—at first the site of a wire plant, rod plant, and steelworks, and then a zinc works.  Donora’s continual industrial growth, especially after World War II, made it one of several important small “steel cities” along the Monongahela River as it wends from the coalfields of northern West Virginia through what became known as “The Mon Valley” before reaching Pittsburgh to help the Allegheny River form the Ohio River.

With industrial growth came constant pollution. I grew up sixty miles east of Donora in Johnstown—another small steel city—in the 1960s and early 1970s.  During these years I also spent many, many days visiting my grandparents in Bridgeville thirty miles northwest of Donora.  I can still remember the horrible smells from the Koppers chemical plant there if the wind blew in the wrong direction, and the drive back to Johnstown through Pittsburgh with smoke billowing steel mill furnaces towering right next to the “Parkway East” interstate highway.  And though not as bad as the infamous 1940s when Pittsburgh often saw streetlights burning during the day, the 60s and 70s still had their fair share of air pollution.  It’s funny, however, that while growing up in western Pennsylvania I never heard about “The Donora Death Smog” of 1948; that is, until a few weeks ago when I saw the Hugh Morton photograph above, made in Wilmington, North Carolina—and came to learn something about my own regional heritage.

On Wednesday, October 27th, 1948 an air inversion formed above Donora, trapping a deadly smog over the city.  Many people became seriously ill. By the time rain dissipated the inversion on Sunday, 19 had people died, and between 4,500 and 7,000 (estimates vary) had been afflicted in some way.  The negative health affects of the smog, however, lasted well beyond those few days, especially since the air was usually polluted to some degree, inversion or no. The Death Smog of Donora quickly became front page national news. 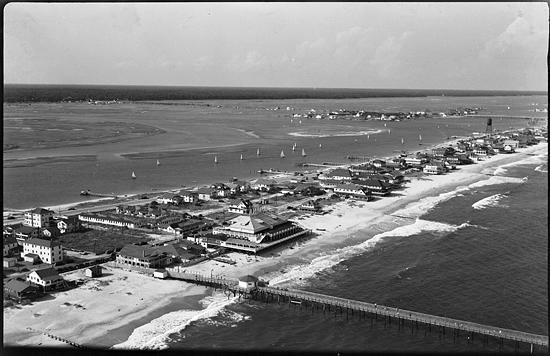 After reading this news in Wilmington, North Carolina, L. C. LeGwin approached his friend Bill Broadfoot with the proposition that Wrightsville Beach had a lot of what Donora did not—fresh air and sunshine. Broadfoot was president of the Wilmington Jaycees (Junior Chamber of Commerce), and LeGwin proposed that they invite fifty citizens from Donora for an all-expenses-paid week to Wilmington and Wrightsville Beach. Broadfoot made a proposal to the Jaycees, which it approved, and on November 2nd—only two days after the sickening smog lifted—Jaycees secretary John H. Farrell called Donora’s mayor with the invitation.

A week later, doctors in Donora had a list of citizens most in need of help.  Volunteers and donors in Wilmington and Wrightsville Beach stepped up with free medical care, dinners, concerts, bakery goods, eggs, cereal, milk, vegetables, ice cream, pier fishing, laundry and dry cleaning, haircuts, newspapers, and more.  Government regulations, however, prevented airlines from providing free flights.  After a telegram appealing to President Truman (who was vacationing after his successful reelection in Key West, which included a brief two-hour stop at Cherry Point and New Bern, also photographed by Morton, on November 7th) lead to a plea to the Civil Aeronautics Board.  After a few days more of bureaucratic resolve, the C.A.B. issued an exemption that permitted a round-trip flight on Capital Airlines—with one of its two hubs at the Allegheny County Airport in West Mifflin twenty miles upriver from Donora—for a $2,000 fee to be paid by the Jaycees through fund raising.  Finally on November 18th—a week before Thanksgiving Day—a plane donning “Good WILLimgton Mission” especially painted on its side landed at Wilmington’s Bluethenthal Field.

The Pennsylvania guests, or “Donorians” as the Wilmington Morning Star dubbed them, stayed in heated homes and apartments around the Lumina (the large building seen left of center in the above bird’s-eye view of Wrightsville Beach). The week’s activities were many and, needless to say, Hugh Morton and camera were often in attendance.  The Wilmington Morning Star published five Morton photographs during that week, including one very similar to the image below made on Friday, November 19th when the Donorians rode in a motorcade to Orton Plantation. The photograph’s caption noted that their tour was “personally conducted” by Billy Broadfoot and Mrs. Betsy Sprunt. (The Sprunt family owned Orton Plantation from 1884 until selling it in December 2010.) 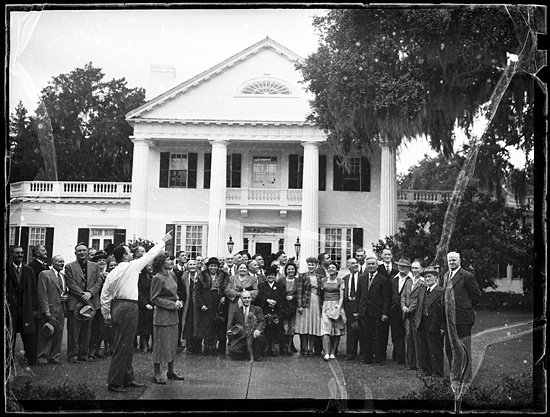 A second photograph’s caption exclaimed, “Donorians See First Moss”—to which I can attest that Spanish Moss is not native to western Pennsylvania—as Cesare Valreri “adorns” Elizabeth Chiedor with the natural garland gathered during their tour of Orton Plantation. 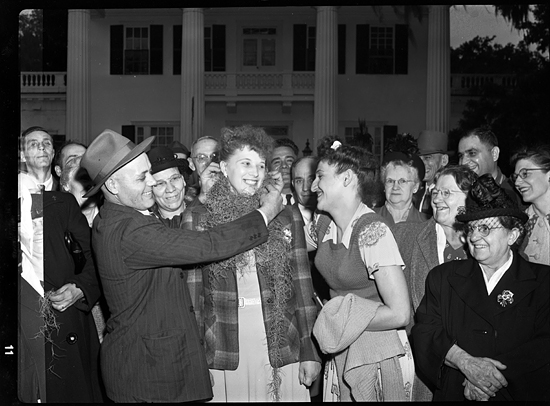 There is a detailed account of the festivities held during the Good WILLmington Mission in chapter twelve, “Escaping Donora’s Deadly Smog” in the book, Wrightsville Beach: The Luminous Island by Ray McAllister (2007). Among their activities, a photograph of their tour of Airlie Gardens on Saturday, November 20th is neither in the newspaper nor in the Morton collection.  A Morton photograph made during a dinner at the Trail’s End restaurant appeared in the November 23rd edition of the newspaper; the negative is in the Morton collection, but it is deteriorated. 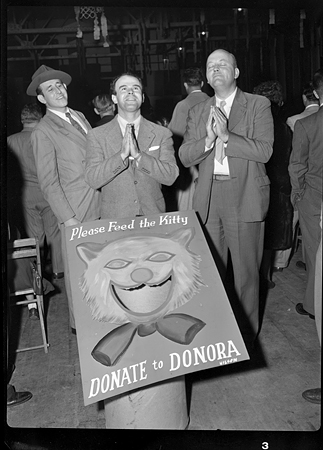 An image similar to the “Donate to Donora” photograph (above) depicted Jaycees treasurer Tom James and president Billy Broadfoot raising money for the chartered air flight during the gala farewell party at the Cape Fear Armory on Wednesday night.  (The gentlemen in the picture above are unidentified.)  The published version didn’t appear in the newspaper until Friday morning, however, with the headline “Feed the Kitty”—published politely, perhaps, after the visitors had returned because the newspaper said they were still short $1,400 to cover the cost of the flights.   The photograph below also ran in the Friday newspaper, although cropped as a tight vertical centered on Wilmington mayor pro tem James E. L. Wade and his farewell kissers. 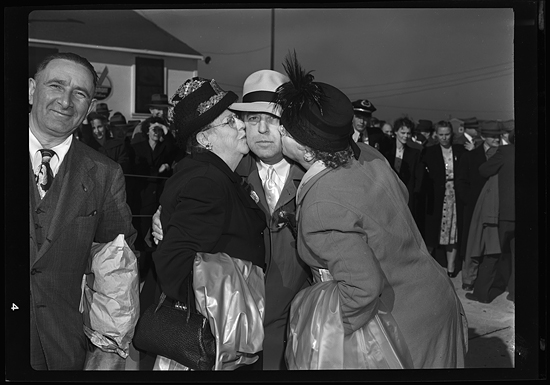 The Donora Smog Museum emblem touts, “Clean Air Started Here October 1948.” I find myself wondering about the connection between the Donora Smog and Hugh Morton’s later efforts to document photographically the harmful effects of acid rain in mountains forests. There may not be a direct connection, but the experience may have been one of those small stepping stones along the way to Morton’s campaign against acid rain, which culminated in his award-winning (CINE Golden Eagle, 1994) film, “The Search for Clean Air” narrated by Walter Cronkite.

8 thoughts on “Donorians and the Good WILLmington Mission”