Today, May 10, is the 62nd anniversary of the 1949 dedication of the Morehead Planetarium at the University of North Carolina at Chapel Hill.  May 6th marked the last show at the planetarium to use the the Zeiss Model VI Star Projector installed in 1969, which replaced the Mark II installed in 1949. Since January, the planetarium has been phasing in a new fulldome digital video projector.  In recognition of this year’s anniversary, regular contributor Jack Hilliard recounts a few highlights from the Morehead Planetarium’s luminous past. 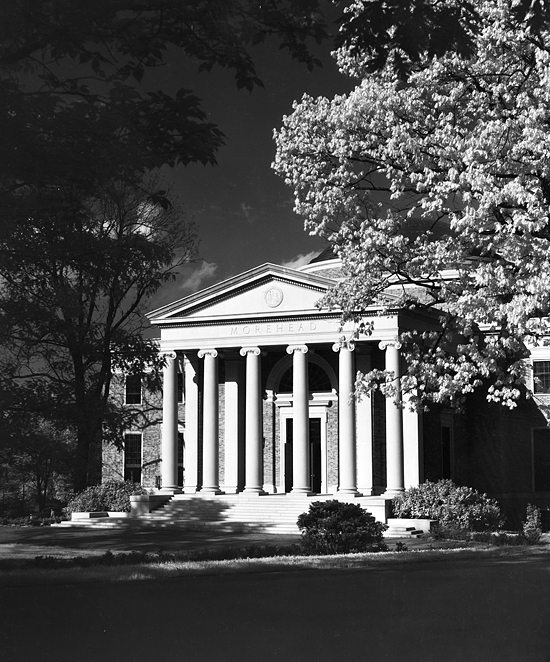 Within one year of their selection, all seven of NASA’s Mercury Astronauts had trained at the Morehead Planetarium on the UNC campus.  The selection announcement was made on April 9, 1959 and by March 3, 1960, all seven had undergone celestial navigation classes in the Morehead simulator.  Shepard, Grissom, Glenn, Carpenter, Schirra. Cooper, and Slayton would become household names across the world.
Only two of the original seven are still living, but when John Glenn and Scott Carpenter recall their days in Chapel Hill, they always talk about their friend Tony Jenzano who was the Planetarium Director at the time.  In the mid-1970s, the Mercury Seven gave Jenzano their Silver Snoopy award, an honor only given to those earthbound people whom the astronauts considered extremely valuable in helping them accomplish their missions.
The astronaut training program continued at the Planetarium through the joint US-Soviet Apollo-Soyuz Test Project in July of 1975 when Astronaut Donald K. “Deke” Slayton finally got to fly in space.  Although he was one of the original Mercury Seven, a heart problem kept him on the ground until July 15, 1975.
Of the twelve U.S. astronauts who walked on the moon, eleven trained at the Morehead Planetarium.
On June 16, 1989, five of the Mercury seven returned to Chapel Hill to celebrate several anniversaries: the 30th anniversary of the US space program, the 40th anniversary of the Morehaed Planetarium, and the 20th anniversary of the first moon landing.  Wally Schirra, Scott Carpenter. Alan Shepard, Gordon Cooper, and Donald “Deke” Slayton, along with Betty Grissom, wife of the late “Gus” Grissom were on hand for a special celebration. (Sen. John Glenn, the other Mercury Seven astronaut was not able to leave his duties in Washington). The astronauts presented a plaque commemorating their Chapel Hill training to Jenzano.
The astronaut training program was not the only time the Morehead Planetarium was in the national spotlight. The first planetarium director, Dr. Roy K. Marshall, who had come to Chapel Hill from the Fels Planetarium in Philadelphia, brought with him a NBC television program called The Nature of Things. Dr. Marshall had started the program in early 1948 and it continued until 1954.  Marshall also brought with him future planetarium director Tony Jenzano, who took over in 1951 and remained in that position until 1982.
The Morehead Planetarium became the world’s sixth planetarium and the first on a university campus when it was officially dedicated on May 10, 1949. That dedication attracted 400 people including some of North Carolina’s most prominent citizens: U.S. Senator Frank Porter Graham, N.C. Governor W.  Kerr Scott, Acting University President William Carmichael, University Chancellor Robert House.  Also in attendance was noted chemist, industrialist, engineer, and diplomat John Motley Morehead III, UNC class of 1891, and members of the Morehead family.  During the 17-month construction period, Morehead had traveled to Sweden to get the Zeiss II planetarium projector since the German firm that produced the equipment had lost most of its factories during World War II.  Audio clips of Morehead and Graham speaking at the dedication ceremony are available on the planetarium’s website.
I recall Professor Ross Scroggs telling his Physics 45 class about how the tiny slides that were projected onto the 68-foot-diameter-dome were originally written in Swedish and it became his job, as a photographic expert, to figure out a way to precisely reproduce the slides and at the same time translate the information.  He attributed his thinning, gray hair to that challenge.
At the time, the Morehead Building was the most expensive building in North Carolina history. The cost: a little over 3 million dollars.  (That would be about 28 million in today’s dollars).
Dr. Frank Graham, dedicated the building to “youth and truth, beauty and goodness.”  North Carolina Governor W. Kerr Scott accepted for the state.
Following the dedication, the dignitaries viewed the planetarium’s first show, “Let There Be Light,” which was narrated by Dr. Marshall. (A Planetarium booklet published in 1949, says that admission to the planetarium was 38 cents for adults).  At Christmas, 1949, the planetarium presented its “Star of Bethlehem” program, which has been presented every December since and is now the longest running planetarium show in the world. An audio clip of “Let There Be Light” is also available on the planetarium’s website.
Over the years, the Morehead Building and its surrounding gardens and famous sundial were photo subjects of Hugh Morton.  From an infrared view to an all encompassing aerial shot, Morton covered the scene in his own special way.
By 2009, sixty years after its dedication, The Morehead Planetarium and Science Center, as it was renamed in 2002, had welcomed more than seven million visitors.  Early in 2010, the planetarium converted its presentation to the latest digital technology.
Finally, if I may, let me mention one of my favorite planetarium displays on the 44-foot- tall-theater dome.  On page 75 of the Life magazine issue for October 3, 1949, there is what the magazine called a “Celestial Choo Choo”—an image of UNC All America football player Charlie Choo Choo Justice in stars eluding an astral tackler.  The photograph was taken by Jonh Dominis, a Hugh Morton contemporary, in August of 1949 when Dominis was in Chapel Hill working on a Charlie Justice feature for the magazine.

8 thoughts on “The Brightest Star of All”