On Sunday morning, December 7th, 1941, Hugh Morton and fellow students at the University of North Carolina likely scanned the headlines on the front page of The Daily Tar Heel (DTH).  Many students had been to the Carolina Youth Administration fundraiser Saturday night: a midnight showing of the film Bluebeard’s Eighth Wife. If they were reading the DTH that morning, they also would have seen the front-page article, “Round Table Talk to Treat Phases of Japanese War,” which began,

“Must We Fight Japan?” will be the topic discussed on the  “University Round Table” this afternoon from 3 until 3:30 o’clock over stations WRAL, WAIR, and WBBB.

Ironically, Japan’s attack on Pearl Harbor had begun at 6:00 HST (11:00 EST) that very morning, with the first bomber appearing in the Hawaiian skies at 7:55 HST.
As these events were unfolding, Hugh Morton was the DTH staff photographer.  Surprisingly, there are no campus news photographs reflecting student life after December 7 in the six remaining issues of the newspaper before winter break (December 9 through 13 inclusive, and December 18).  Following the holidays, the DTH resumed publication on January 6, 1942.  It was not until another six issues had passed, however, on January 11 that the DTH published Morton’s first campus news photographs related to America’s entry into WWII—two images, including one very similar to the scene below of the first drill of the Carolina Volunteer Training Corp (CVTC) on snow-covered Fetzer Field.


The Alumni Review for January 1942 published a few Morton photographs, including the first photograph above, which was not previously scanned as part of the online highlights from the Morton collection.  The group portrait is part of a collage entitled “University Enlists” made using seven photographs that “illustrate some of the ways in which the University is cooperating with the war-effort.”  The Alumni Review caption for Morton’s uncredited photograph identifies the group as student body president Truman Hobbs, UNC President Frank Porter Graham, and Woman’s Association president Mary Caldwell “as they confer informally on the steps of South Building.”  On a different page, the magazine published another Morton photograph (below) with an extended caption entitled “Graham and the War” that described the portrait as a “new picture” of Graham at his South Building office desk “in serious telephone communication with officials in Washington.”  The photograph’s credit reads, “The picture was taken by Student Hugh Morton for the Institute of Government.” 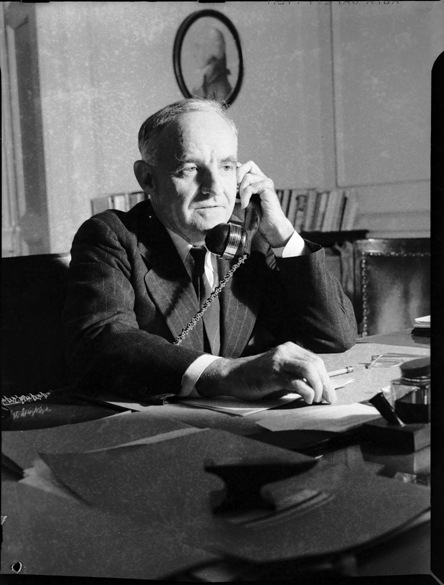 In future posts, I’ll highlight more of Morton’s World War II-era photographs that he made while he was a student at UNC before he enlisted in the fall of 1942.  On this seventieth anniversary of America’s date of infamy, reading Janis Holder’s essay “Covering the Beat: The University in the WWII Era” would give you a good sense of what was facing Hugh Morton and his fellow classmates that fateful Sunday morning.
And what happened with the University Round Table radio program?  As the discussion participants—history professors J. L. Godfrey and Georgre Mowry; retired Navy Admiral P. W. Foote; and Roger Mann, president of the International Relations Club—arrived in the studio, “news came in over the radio that Japan had attacked the United States.”  They had ten minutes to come up with a topic and, at 2:55 agreed upon a new title for the program: “Why Has Japan Attack Us?”  The DTH reported afterward that, “At three o’clock, the program went on the air.  These gentlemen rose to the occasion, using information hardly off the news wires.”