On January 31st, 1942 Eleanor Roosevelt visited North Carolina, primarily to attend sessions and speak at Memorial Hall on the second of a two-day, jointly sponsored Carolina Political Union–International Student Service Post-War Planning Conference held at the University of North Carolina.  As Mrs. Roosevelt wrote in her syndicated column, “My Day“:

We had a delightful luncheon at Chapel Hill with President and Mrs. Frank Graham and their guests, heard Miss Harriet Elliott, Dean of the Woman’s College at Greensboro, make an excellent talk before the delegates of the 32 colleges, who had gathered at Chapel Hill under the auspices of the Carolina Political Union and the International Student Service for a two day conference. It was nice to find that both Miss Louise Morley, Conference Secretary of the I.S.S., and Miss Jane Seaver of OCD, had made real friends among so many students from various colleges, who spoke to me about them with real appreciation.
Jane Seaver and I attended one of the forum discussion groups in the afternoon. I saw an excellent civilian defense information service setup in the college library, a very good local defense council control center in the town, had tea at the Presbyterian Church parlor with a number of the delegates, dined in the college cafeteria and spoke and answered questions in the auditorium in the evening, at a meeting which Governor and Mrs. Broughton also attended.

Two uncredited photographs of Mrs. Roosevelt appeared in The Daily Tar Heel the following day, plus a photograph of a speaker from the previous day.  There are eighteen negatives in the Morton collection related to Mrs. Roosevelt’s visit to UNC, including both of the images published in the DTH (which are are not currently in the online collection), so they are represented here in “A View to Hugh.” The lead photograph above is presented as published by the DTH.  Here is the full view: 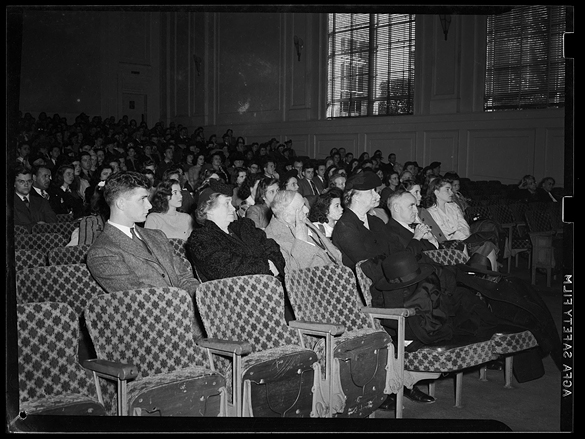 Below is the second Morton photograph of Mrs. Roosevelt published in the DTH, followed by the full negative: 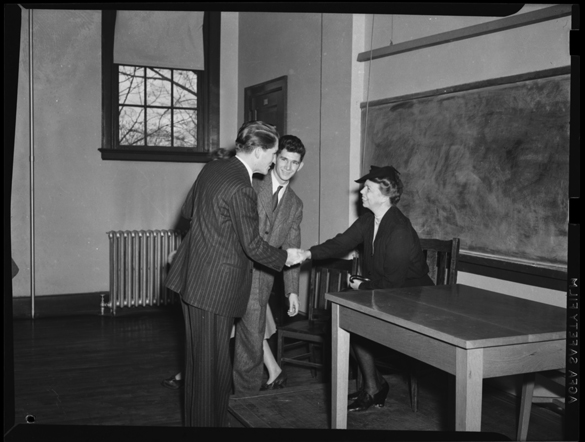 Notice how the cropping almost entirely eliminates the woman walking behind Whitaker?