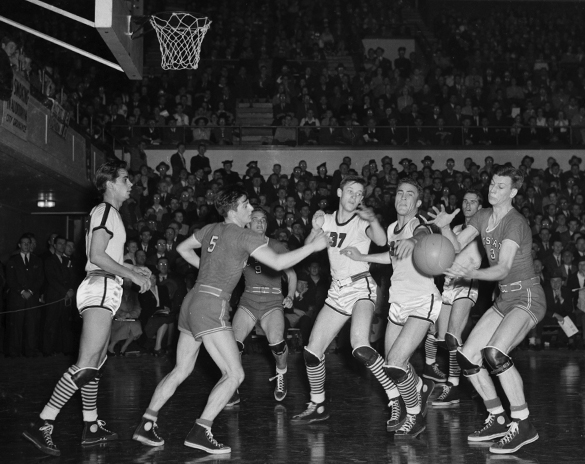 UNC and WWII during the winter of 1942:  I’ve been living an on-again-off-again life in the winter of 1942 for some weeks now, researching images made by Hugh Morton before he enlisted in the United States Army in the early autumn later that year.  This double-life springs from the post marking the seventieth anniversary of the Japanese attack on Pearl Harbor on December 7th, 1941, which had a profound impact on the lives of Hugh Morton and his fellow students at UNC.  A few posts have examined Morton’s photographs depicting activities on campus related to America’s entrance into the second world war, especially those appearing in The Daily Tar Heel (DTH) student newspaper, for which Morton was the staff photographer.  The last post of this type focused on Eleanor Roosevelt’s visit to UNC on January 31st, 1942.
With the exception of one photograph (identified just this week) no Morton photographs depicting war related activities or subjects appeared in the DTH.  That photograph, an uncredited portrait of UNC business manager Livingston B. Rogerson in the February 15th issue, illustrated a front page article informing DTH readers that Rogerson was also serving as the Coordinator of the Office of Civilian Defense—a joint effort between the university and village of Chapel Hill.  Nearly all of Morton’s photographs published in the DTH during this period were sports photographs.
Basketball, 1942:  A blog post in early February 2012 on the day of UNC men’s basketball game against Duke included a minimally identified negative.  Investigations by two of our readers (thank you Jack and Jake!) led to more accurate identification for that image.  In one comment during the online deliberation, Jack Hilliard noted that the other, unidentified photograph (made on 11 February 1942 at Woollen Gym) was in the 1979 book The Winning Tradition: A Pictorial History of Carolina Basketball.  While I was looking for that photograph in the book, the above photograph on a different page caught my eye—or at least the author’s caption did:

This photograph is believed to be one of photographer Hugh Morton’s earliest action shots and captures all the excitement of Carolina basketball in the early 40s: a packed Woollen Gym, plenty of action underneath the boards and those crazy stripped [sic] socks.  There was, however, one problem—our editors searched high and low for the identification of the players but came up empty handed.

I both hate and love seeing captions like that!
One morning while preparing this week’s post, I took a peek into the beginning of the book Hugh Morton’s North Carolina.  On the first page, Morton stated that he had shot a lot of freelance work for the Charlotte News, especially sports, when he was a UNC student.  That made me wonder if the newspaper might have published a Morton photograph of the 1942 Southern Conference tournament played at Raleigh Memorial Auditorium in early March.  Some of the identification work I had been doing had led me to discover some photographs I suspected may have been made during that tournament.
The newspaper did indeed publish a few Morton photographs during that weekend, including the photograph above.  For today’s featured photograph, here’s most of the caption written by the Charlotte News for the March 6th issue, which will immediately reveal why the The Winning Tradition editors couldn’t identify the UNC players:

IN A PRETTY GOOD STATE yesterday afternoon were the Terrors’ chance of winning a tourney title at Raleigh as they ousted South Carolina, 56-43.  Photographer Hugh Morton’s camera caught this glimpse of a basketball ballet under the State basket in the first half with Buck Cavalho and Strayhorn of State; Brogden, Dunham and Westmoreland of South Carolina and Bernie Mock of State in a graceful array. . . .”

The Red Terrors was one of several nicknames used by North Carolina State University athletic teams before Wolfpack, and the photograph depicts a scene from the opening round game played on March 5, 1942.
Tomorrow’s post: Jack Hilliard presents an historical background of the Southern Conference.