The “Sweet Sixteen” round of March Madness begins today, so  A View to Hugh contributor Jack Hilliard takes a personal look back at a very special time in Carolina basketball history—1957— in part one of a two-part series.  Part two will recall UNC’s 1982 championship.
Update on 3/28/2012: Working on part two today,  I discovered that I inadvertently omitted a dedication request by the author when I was constructing this post.  The post is dedicated to the 1957 team manager, Joel Fleishman,  who passed away earlier this month.  As a News-Record.com news brief put it, “Joel Fleishman was the manager of the 1957 North Carolina Tar Heels until the day he died.”

This radio broadcast has become a classic, but the television coverage of that championship game played a significant role in television sports history as well.

Friday, March 15, 1957 was career day at Asheboro High School.  Representing careers in television was Jack Markham a producer/director from WFMY-TV in Greensboro.  I remember how excited he was that his station was going to carry Carolina’s Eastern Regional game that night against Canisius from the Palestra in Philadelphia.  Many of us at Asheboro High had seen the ’57 Tar Heels when they came to town to play the McCrary Eagles in an exhibition game on December 1, 1956—a game that Carolina won but did not become part of the 32 and 0 season.
The day before, on March 14th, WFMY’s general manager Gaines Kelley had announced the station would follow Carolina in both its East regional games.  (In those days the first-round loser played a consolation game the next day.)  Said Kelley: “We at WFMY-TV are as proud of the Tar Heels as anybody else, and we are happy to be able to give fans in our coverage area a chance to see the game on live television.”  The Greensboro station had a special interest in carrying the UNC games because WFMY-TV produced the weekly Frank McGuire Show.
This regional NCAA network had been set up by station WPFH-TV in Wilmington, Delaware with Matt Guokas, a former Philadelphia Warrior NBA star, doing the play-by-play.  Of course the NCAA was in full control of the telecasts with their man, Castleman D. Chesley, leading the broadcast team.  Other North Carolina TV stations on the network included WBTV in Charlotte, and WTVD in Durham.

The undefeated Tar Heels were 28-0 and Coach Frank McGuire, upon arrival in Philadelphia, told the press, “This is a road club . . . winning 21 games on the road.”  The coach was then reminded that it was really only 20 road games.  McGuire added: “But I still count McCrary as a game because nobody can tell me that we didn’t have a really tough night down there in Asheboro.”
Road wins continued as the Tar Heels beat Canisius that Friday night and then beat Syracuse the following night.  It was on to Kansas City, Missouri for the final four (although it wasn’t called “The Final Four” in those days.)  Carolina was 30 and 0 going into Kansas City, but it hadn’t always been easy.  There had been close overtime games at South Carolina and Maryland—and then there was Murray Greason’s Wake Forest Demon Deacons.  The Tar Heels and Deacons had met four times during the 1956-57 season and each one had been close.  Two regular season games, a game in the Dixie Classic, and a two-point game in the ACC Tournament.  Coach Frank McGuire had great respect for Wake and he often spoke of it in interviews.

Before the games in Philadelphia started, C.D. Chesley was already working on a NCAA network for Kansas City.  On Wednesday, March 20, WFMY General Manager Kelley made another announcement.  Again Chesley had put together a network of five North Carolina TV stations for the games in Kansas City, and WFMY, WBTV, and WTVD would be a part of it.  He added that his Sports Director Charlie Harville and his Chief Photographer Buddy Moore would be traveling with the Tar Heels.  Kelley also liked to plug his game sponsors which were Carolina Steel, Guilford Dairy, and Security National Bank.

Hugh Morton didn’t travel to Kansas City for the championship weekend, but when he heard that the games were going to be on TV, and since the coverage area didn’t extend to the North Carolina coast, he and wife Julia headed to Raleigh, checked into the Sir Walter Hotel and watched the games there.
Both the National Semifinal with Michigan State and the National Final with 7-foot, 2-inch Wilt Chamberlain and Kansas in Kansas City’s Municipal Auditorium turned out to be classics.  Triple overtimes each night, with UNC Center Joe Quigg hitting two foul shots with six seconds remaining in the final overtime against Dick Harp’s Kansas Jayhawks to win the National Championship. The telecast had some other memorable moments.  At halftime, WFMY-TV Sports Director Charlie Harville interviewed North Carolina Governor Luther Hodges, who predicted a Carolina win. Hodges had flown in along with his private secretary Ed Rankin, Lt. Governor Luther Barnhardt, and several other members of the NC legislature.  Their flight, on a DC-3 owned by Burlington Industries, left Raleigh-Durham Airport at nine o’clock on Saturday morning.  A police escort met the Governor’s party at the Mid-Continent International Airport and took them to a Tar Heel gathering at Hotel Continental in downtown Kansas City.  Then it was off to Municipal Auditorium where they joined 10,500 other fans.

Back in the WFMY-TV studios in Greensboro, staff announcer Lee Kinard, who had been with the station less than a year, prepared to do his live Guilford Dairy commercial.  Kinard recalls the sponsor wanted the commercial to feature ice cream, but under the hot TV lights, ice cream didn’t hold up very well, and since there were no TV-times-outs in those days, the Greensboro crew didn’t know when the commercial was going to come.  Said Kinard, “We kept putting out fresh ice cream and it just kept melting during those three overtimes.”
Lee Kinard would go on to become a legendary hall of fame broadcaster with a career spanning more than 45 years.
Following the broadcasts, both radio and TV, a celebration broke out on Franklin Street with thousands of students and alumni.
Chapel Hill author and historian Roland Giduz writing a special report for the Greensboro Daily News described what he saw along Franklin Street:

A zany bedlam enveloped this usually quiet college community shortly past the stroke of midnight…The celebration was the biggest in Chapel Hill since the night before—following the Tar Heels’ triple-overtime win over Michigan State.  And the latter was the wildest spontaneous rally local officials could recall since V-J night 12 years ago.


The celebration in Chapel Hill wasn’t close to the size of the one at Raleigh-Durham Airport.  About 2:10 p.m. on Sunday, March 24, 1957, Eastern Airlines Flight 527 was on final approach to RDU when the pilots got a message from the tower: “Go around while the police clear the runway.”  About 15,000 Tar Heel well-wishers had gathered to welcome the 32 and 0 Tar Heels home.  Among the 15,000 was photographer Hugh Morton with camera in hand. 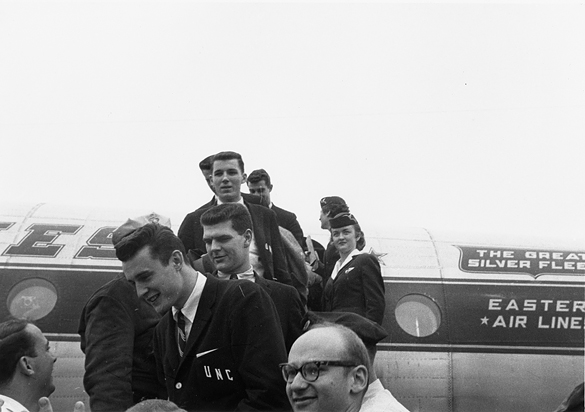 About 15 minutes later the Lockheed Constellation carrying the victorious Tar Heels landed to thunderous cheers.  Coach McGuire and team captain Lennie Rosenbluth were not part of the celebration.  Rosenbluth was headed to New York as a member of the Look magazine All America team, which was scheduled to be on “The Ed Sullivan Show” that night. Coach McGuire had been on the “Sullivan Show” the Sunday before as the United Press national coach of the year.  This weekend he stayed in Kansas City to coach in the All-Star game with his old buddy, Navy Head Coach Ben Carnevale, as his assistant. (Carnevale was UNC’s Head Basketball Coach from 1944 to 1946.)  Rosenbluth was to fly back in time for the Monday night All-Star game.
In the middle of the crowd at RDU was UNC Chancellor Robert B. House who had a speech prepared, but wasn’t able to give it because of the noise.  About thirty minutes later, the Hodges’ group landed.  Said the Governor: “It was great but I don’t think I could take another game like that one.”
While Coach Frank McGuire was in Philadelphia for the Eastern Regional, he had received a special telegram from back home.  He read it to his team before the Eastern Regional final with Syracuse.  He then put it in his jacket pocket. He carried it with him to Kansas City and decided to read it again before the NCAA final game with Kansas.
The telegram read:

Best wishes and all the luck in the world.  You proved it to us; now prove it to the nation.

It was signed by each member of the Wake Forest basketball team, Head Coach Murray Greason and Assistant Coach Bones McKinney.  In the early morning hours of Sunday, March 24th, the victory bell in the old Wake Forest administration building rang out celebrating the Tar Heel win.

And, as for Jack Markham and that career day at ASH . . . well six years later Markham had risen to program director and production manager and in January of 1963 he hired a young UNC grad as a production assistant at WFMY-TV.  I would work there for 42 years.

For more photographs from the North Carolina Collection Photographic Archives of the UNC 1956-1957 basketball season, visit the webpage McGuire’s Miracle.

Correction: on 13 June 2014, the type of plane that brought the UNC team to RDU was changed to “Lockheed Constellation,” which was previously described as a DC-7.  See http://pages.suddenlink.net/w4ydy/unc1957.html for color slides made at the event, which clearly show the aircraft.

Correction: on 3 March 2017, corrected the misspelling of the name Matt Guokas, which was incorrectly spelled as Koukas.

9 thoughts on “The Madness of March: Two Championships Uniquely Remembered (Part One)”